Another random entry for today. Whilst I had my youngest son at home with me and the time to actually have some quality time together this Easter weekend we got out a few games that haven't been played in a while. I have already mentioned the game of Risk at which he thrashed me earlier, but we also managed to follow that up with a few games of the Top Trumps Quiz on Dinosaurs. 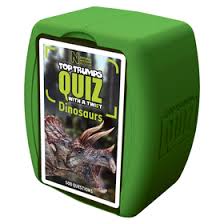 This is not directly wargaming related but it is a game and can be used for cherry picking details to use for gaming, so I think it can feature here as many RPGs feature dinosaurs. Back in the very early 80s (way before the movie Up), I created an AD&D world wherein all cities were situated on top of those Venezuelan style table-top mountains. Each mountain featured antediluvian creatures and races of beings, much like in The Lost World by Conan Doyle, as adversaries and random encounters to those who had established the city states. One in particular featured a city of dwarfs who went to war on the backs of ceratopsians.

I have always had an interest in dinosaurs and pride myself on a very broad knowledge of them and the eras/periods they lived in - I have read so many books on them over the years that some of that information has actually stuck! Anyway, this knowledge meant that I managed to get my own back on my son after my trouncing at his hands at Risk, and won all of the games we played of this. He then decided to test my dinosaur knowledge more fully and ran through the first questions on 50 of the cards - I managed to answer 43 of them correctly! I was quite happy with that result.


I think I will look into a bit more dinosaur (and other prehistoric beast) related stuff for my future games - perhaps I can see about how to incorporate them into my new fantasy world I mentioned a few posts back?