There are two major religions within Vannin, with one split into two forms of worship. There is the newly arrived monotheistic sun worshipping religion of Sol Invictus with its many saints and the Old Faith, split in two; most worship the pantheon of gods but others worship the demons and devils from beyond (the Void, the Abyss, the Gap between the worlds etc.). The Old Faith has been around for millenia but the worship of Sol Invictus has only recently been introduced to Doggerland.

Here is a list of the major deities within each religion...

Sol Invictus
Worship of the sun as a supreme being. There are many saints associated with this religion who have powers within their own rights but they all swear obedience to the great sun god.

The Old Faith
The pantheon is revered as a whole, but individual clerics will favour an individual god or Nature itself as an entity (in the case of druids). The main deities are...

Woden - king of the gods, lord of the wind, wisdom, leader of the Wild Hunt and those killed in battle
Thunor - god of thunder (son of Woden)
Frig - goddess of fertility (in people) (grand daughter of Woden)
Tir - god of law and heroic glory
Hermod - god of swiftness
Balder - the bleeding god, god of healers
Heimdall - guardian of the entrance to Valhol
Hel - goddess of the underworld (where those not slain in battle go)

Niord - god of the sea, wind, waves and fishing
Freya - chooser of the slain (daughter of Niord)
Frey - god of travel (son of Niord)

The Old Faith (Cthonic religion)
This is the dark side of the Old Faith pantheon. There are great deities worshipped in this pantheon, but in this region of the world, Cromm Cruach, the maggot or worm god is the prime mover. He is assisted by legions of demons, devils and monsters from between the stars. 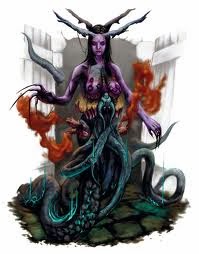 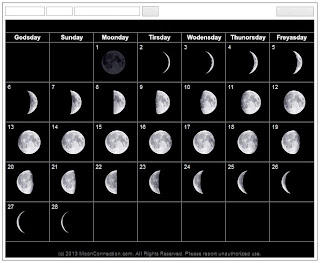 
There are seven days in a Doggerland week. The days, named after the Old Faith gods, are as follows…

There are four weeks in each month. Each moon cycle lasts exactly 28 days from New Moon to New Moon. There are thirteen months celebrated in the Doggerland year of 364 days. Each season lasts for three months except for winter which is longer at four months – this is just a vagary within the calendar as the actual equinoxes and solstices fall exactly a quarter of a year apart. Different things are celebrated or looked out for in each month, thus the names of the moons/months are based upon those events.