Last night saw me return to my Pendragon character, Sir Docimedis, for another session of adventure and courtly derring-do. I have only played in two sesions of this game so far (and had three or four years of catch-up played by email) and I can only say that I am thoroughly enjoying it. Last night's evening of intrigue and battle was no different.

Our Gamesmaster, RM, is running us through a humungous tome called The Great Pendragon Campaign. When I saw the book I thought it was a main rulebook, not an adventure background. It truly is a magnificent tome that the late Greg Stafford apparently spent over twenty years perfecting for publication. He certainly knew his onions. 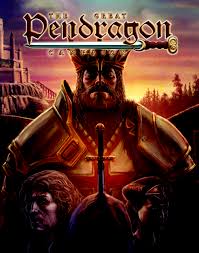 Last time out we left Sir Docimedis and companions on their way home from an adventure in London to purchase some uprated mail armour. Whilst dispatching a Saxon raiding party, Sir Docimedis picked up a wound from a spear thrust and was knocked from his horse for a further insulting injury. He managed to get home to his manor where he was healed fully and the adventure was picked up from here...

The return to Salisbury was uneventful. Every knight was dismissed from military duty and returned to his own manor. Sir Docimedis used this time to heal and prepare for the winter court.

The king, Uther, was in a more convivial mood than last time round and the court were happy to listen to Sir Brutus tell his tale of the skirmish with the Saxon raiders, which prompted Sir Docimedis to orate his deeds from the Siege of Bayeux in the previous campaign season, earning him some glory. Both Sir Errol and Sir Goodrick delivered their gifts and pledges of betrothal to their prospective future wives and weddings were tentatively announced.

The following Spring Court was attended by the king as well as the dukes of Lindsey and Silchester. The meeting was headlined by the announcements of the king concerning the Saxons and the recalcitrant Duke of Cornwall, Gorlois. The northern Saxons were stirring up trouble around Eboracum and Logris and Uther demanded action against them; he called for all knights to be put onto a war footing. On a less grand scale, the wedding of Sir Goodrick to the Lady Indeg, a wealthy, but ageing widow, was announced for later in the year (after the campaign season) and Sir Lleddren announced a feast at his manor to celebrate his betrothal to the merchant’s daughter Jayne.

After the rousing speech from the king, his forces marched on Cornwall as a show of force against the duke, Gorlois, whilst the Duke of Lindsey marched north to face the Saxons. The king’s army met Gorlois’ army on the Somerset border at a point where Gorlois held a small hill, was flanked by a forest and the valley ground before him was split by a stream making the potential going difficult; a fine set up for him to win a battle should one occur.

Although Sir Errol spotted the potential for an ambush, and Sir Lleddren reported the movement of skirmishers and archers hidden in the forests it took a while for the information to rise up the chain of command. In the meantime, King Uther had begun a steady march up the valley towards his foe. He and a few advisors split from the main body of the army and were joined like-for-like by Duke Gorlois’ parley. A negotiation broke out and didn’t appear to be going well for the king until Merlin advised that he draw Excalibur. The light from the noble sword showed the king all of his enemies, including those hiding in ambush, and this caused the duke to back down and accept Uther as his overlord.

Lord Gorlois returned to Cornwall whilst those under the command of King Uther journeyed north to join with the Duke of Lindsey in order to take the fight to the Saxon invaders. When the two armies joined, commands were given and the army split; each raiding party headed out to hunt down their quarry.

Due to being the highest-ranking knight amongst his companions, Sir Brutus led his small band on the hunt for a raiding party or two to dispatch. Very soon, Sir Errol had hunted down a small roving band of Saxon raiders and battle orders were drawn up.

The knights thundered towards the Saxon shield wall on their horses and battle commenced. Sir Brutus charged straight for the leader and took him out of the battle with his first strike. The rest of his knights followed suit with Sir Errol taking out one of his adversaries and Sir Docimedis killing two on his first charge. Unfortunately, Sir Lleddren was knocked from his horse by a particularly stubborn Saxon warrior.

Now that the shield wall was broken, the knights proceeded to pick off their adversaries one-by-one, but the unfortunate Sir Lleddren was grievously wounded whilst trying to regain his feet. Luckily, Sir Brutus was right next to his fallen comrade and was able to stop any further attacks going his way whilst his squire pulled him to a place of safety as the battle raged on.

Next to be unhorsed was Sir Goodrick. He had been lightly wounded by each of his foes but one of the Saxons got in a lucky strike and was about to finish him off when Sir Docimedis rode in and put the Saxon to the sword. Sir Brutus took out the second attacker on Sir Goodrick just as Sir Errol finished off his last foeman. The last Saxon on the battle field was then put to the sword by Sir Docimedis.

In the aftermath, Sir Brutus was able to administer some aid to the injured Sir Lleddren and the unconscious Saxons were ransomed for a tidy sum for each of the knights.

Whilst the knights recovered from their skirmish, word went around that knights were required for garrison duties or should head out for further raids into enemy territory. It should have taken a while for Sir Lleddren to recover from his wounds, but his burning hatred for the Saxons meant that he wanted to be out again fighting his foes. Sir Brutus was happy that he showed such zeal and the companions set out again on a second raid for the season just two weeks after the first one.

Again, Sir Errol used his tracking skills to find a small band of Saxons that were strung out whilst foraging. A quick command and the knights were charging into their foes.

Sir Brutus went straight for the leader and took him out with one swing of his sword. Sir Lleddren, memories of his injuries already distant, also dispatched his first foeman with one swipe of his sword. The other knights managed to land injurious blows upon their adversaries but the Saxon shield wall held firm.

However, the tide of battle turned at that point as a second wave of Saxons joined the fray. Although the knights were able to hold their own and kill one or two warriors, Sir Docimedis was knocked from his horse by a glancing blow. Sir Brutus was again on hand to help defend his less experienced brother and managed to keep Sir Docimedis’ adversary at bay long enough for him to be re-horsed by his squire.

Sirs Goodrick and Errol managed to defeat their foemen and began to push them back but Sir Lleddren, injuries obviously still paining him, was again knocked from his horse. The injuries this time were mostly to his pride, but the re-horsed Sir Docimedis would not see his brother cut down again whilst trying to rise to his feet and rode down the Saxon hovering to give a killing blow to Sir Lleddren. Upon seeing the rest of their fellow raiders cut down in so quick a fashion, the last remaining Saxons surrendered.

The Saxon prisoners were returned to the city where they were ransomed for a small sum for each of the knights. There would be some rest and recuperation required for a few of this band, but lessons were learned and pride was put firmly in its place.