Nick had been badgering me for a while for some new Gondor figures as he had none with spears. I finally succumbed last weekend and ran to EBay to grab him a dozen second hand miniatures that included the four spearmen he wanted (EBay is great for picking up cheap, semi-painted figures).

I then rather rashly promised him that I would play him this weekend, and today he held me to my word. We retired to the man-cave, added a couple of new bits of removable scenery that are almost finished painting (a long wooden fence and a pile of barrels were implemented to try out some advanced rules - defending barriers) and let battle commence...

The last skirmish at the Fords of Cray led to the orcs and elves both retreating to lick their wounds after a close run battle. The orcs returned with a fresh force this time under the more experienced leader Snafu. As the fords are at an important crossing point of the river Cray, the Steward of Gondor decided to send a heavily armed force, under the command of sergeant Dave (Nick's name for his leader!) to take it and hold it against future incursions from Mordor.

The orcs were spotted from the top of the aptly names Shooter's Hill by the three Gondorian archers, who shouted down to their colleagues stationed at the bottom of the hill. 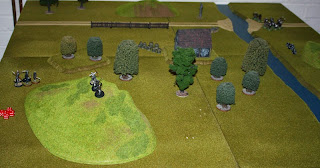 Turn 1 - Gondor Priority
The warriors from Minas Tirith advanced upon their unsuspecting foes who crossed the ford as the sun dipped below the horizon.

Turn 2 - Gondor priority
The orcs crossed the river and Snafu deployed his forces to take the small hamlet. Sergeant Dave, meanwhile, ordered his men forward to defend the pre-prepared barrier of barrels to halt the invaders' advance. 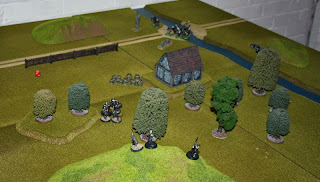 Turn 3 - Orc Priority
The orcs continued their advance, splitting their forces to meet the oncoming men. Several advanced directly towards the hated man-things who had taken up refuge behind the pile of barrels, Snafu and a couple of his strongest warrior prepared to outflank their adversaries and his two archers ran towards the nearby hill that overlooked the hamlet to provide covering fire.

It was at this point that the Gondorian archers on the hill took advantage of their strategic position and laid down some covering fire to aid their comrades before they joined battle; unfortunately all of their shafts missed their targets. Hopefully they would have another clear shot at the orc leader again soon. 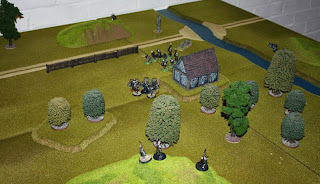 Turn 4 - Orc Priority
The orc archers make it to the top of the hill whilst the rest of their warband took the fight to the hated man-things. In their haste they shot into the combat at the barrel barrier but luckily their shafts passed way overhead.

The Gondorians had the worst of the fight, and gave ground almost straight away, but the one combat they did win led to the demise of one of the orcs - first blood to Gondor! 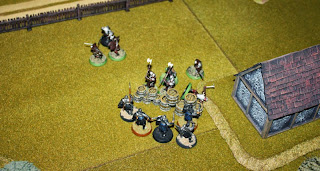 Turn 5 - Gondor Priority
The Gondorian archers on the hill saw that their comrades were being sorely pressed so moved around to try to get better shots at any orc stragglers. The orc archers had no such compulsion and just kept firing into the melee. Their shots hit, but the thick armour of the Gondorian warriors turned the points of the arrows.

The melee, however, went slightly better for the Gondorians. They managed to push back the bulk of the orc warriors attempting to cross the barrier but both sides lost a man in the process. 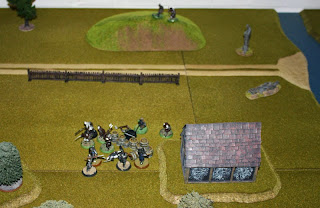 Turn 6 - Orc Priority
Whilst the archers moved off the hill to aid their brothers in arms, they saw that the tide of battle turned against the men again, with the orcs winning all of the combats that had separated off. Sergeant Dave managed to just avoid the slashing blades of the orcs (the Fates smiled on him this day), but one of his men was not so lucky.

Turn 7 - Gondor Priority
The Gondorian archers looked for a way to help their embattled comrades and realised that the orcs sniping from the hill on the other side of the valley would make better targets rather than running the risk of hitting their own men defending the barrier. Their first volley against the orcs resulted in one of the orc archers taking a shaft to his gizzard. He fell to his death from the steep edge of the hill.

The melee continued to swirl around with no-one taking any advantage despite the Gondorians being outnumbered by two to one. 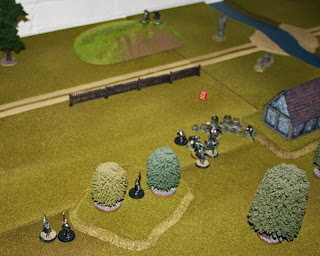 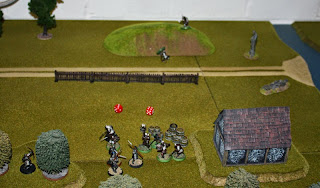 Turn 8 - Orc Priority
The orcs continued to press their advantage in the melee, whilst the Gondorian warriors gradually gave ground. One more of the stout defenders of freedom fell to the ground pierced by an orc blade, but the Gondorian archers again found their mark leading to the last of the orc archers falling to his death from the hill. 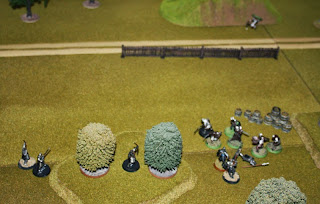 Turn 9 - Gondor Priority
Sergeant Dave looked over his shoulder to see that his rapidly diminishing force had now been joined by the three archers from his flank after they had dispatched their opposite numbers. He ordered his men to retreat to the relative safety of the small copse to his rear in the hope of recreating his battle line with three more stout warriors.

The orcs followed, scenting a rapid victory now, but failed to notice the arrival of the three Gondorian archers from within the woods, who killed one of their number and almost had the eye out of Snafu; the Fates worked for those of good or evil disposition.

Final Turn - Orc Priority
All of the hated Gondorians could now be reached and Snafu ordered his warband to destroy their hated enemy and hold the ford for the Great Eye.

Unfortunately for Snafu, Sergeant Dave's plan worked and the archers in the woods took down the slower axe armed orc. 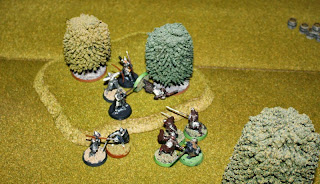 Feeling that retreat was the best form of valour today, Snafu legged it with one of his warriors whilst he ordered the other two to hold off the hated men to make good his escape. 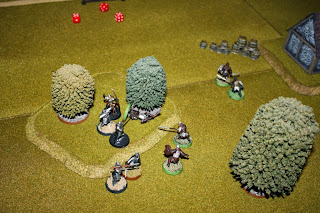 Summary - Gondor Victory
I decided to run this battle for just ten turns like last time, and again it wound up with a determining event on that turn. The orcs took the casualty that took them over the 50% loss value and therefore they had to take Courage checks. The leader and one orc fled but two made their saves (very well in fact!).

Sergeant Dave saved the day and can now look at digging in and holding the ford against future incursions from Mordor.
Posted by Little Odo at 14:59 2 comments:

Mordor vs Rohan picture by Nick

Apologies for there not being much in the way of an update recently. Real life has got in the way, in a good way. I am back working on a temporary basis and that has taken up a lot of my time recently, so my scenery project has taken a bit of a back seat role. However, I have had lots of chats about future projects with Alex and Nick. These chats resulted in a picture drawn by Nick (aged 6) as to what he wants to do in our next game.

He has drawn a great battle scene where Mordor and Rohan are at war. For some reason he has chosen Normans to be on Rohan's side (probably because he has seen my painted Norman Knights from a year or two back that are displayed on a shelf in my new man cave). Anyway, here is his picture and my rough interpretation, which is undoubtedly wrong as kids' imaginations are far better than adults'... 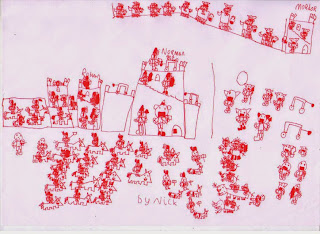 Mordor has a small stronghold at the top of the picture towards which many warg riders are pouring. To the right of the Norman and Rohan castle in the centre are hordes of orcs backed up by a couple of catapults and a line of Mumaks to their fore.

The Rohan cavalry have charged the Mumaks but many have been swept from their steeds by the spiked tusks of the Mumaks. Meanwhile, in the largest stronghold, a large troll has managed to break in and start terrorising the Norman troops stationed there.

Nick asked me when we were going to play another game on our new board, so I will need to arrange that for the boys very soon. His interest in gaming is the keenest at the moment and he has spurred me out of my temporary apathy to pick up my brushes again. My next task this weekend is to peruse Ebay looking for some Gondor (he means Minas Tirith) warriors with spears.
Posted by Little Odo at 07:43 No comments: