Now that the Easter holidays have arrived I have been able to get the boys together for another Battle Companies skirmish in the new den. Alex chose to be Elves, and used his own painted figures, whilst Nick used some of the orcs that I got for him cheaply off Ebay.

After the Easterlings were defeated at the ford a few weeks previously, news spread amongst the forces of evil of the reduced garrison of Rohan troops in the area. A local orc chieftain took it upon himself to investigate in the hope of eating some man-flesh. Unfortunately he was rather shocked upon arrival at the ford, as the humans had moved out to be replaced by a warband of hated Elves.

Turn 1 - Elf Priority
The elves had got wind of the advance of a small party of orcs and raced to the ford to defend the important river crossing. However, with a sneaky move on behalf of the orc leader, a couple of archers had hidden themselves amongst the trees of the small copse by the barn.

This was Nick being a bit naughty. We had set up the board a few hours earlier in anticipation of playing the game later, but Nick had snuck into the games room whilst we weren't looking and moved a couple of his orcs.

The elves and orcs advanced upon the barn, neither aware of the other's presence.

Turn 2 - Elf Priority
The elf commander ordered his two archers to take the hill and lay down suppressing fire if needed whilst the rest of his warband advanced through the copse in the hope of ambushing the advancing orc warparty.

Meanwhile, the orcs had crossed the ford and were headed to their rendezvous with the advance guard archers when they heard the twang of the orc bows. The skill of the orc archers was not up to much and the two shafts alerted the elf wariors to the presence of their hated enemy. 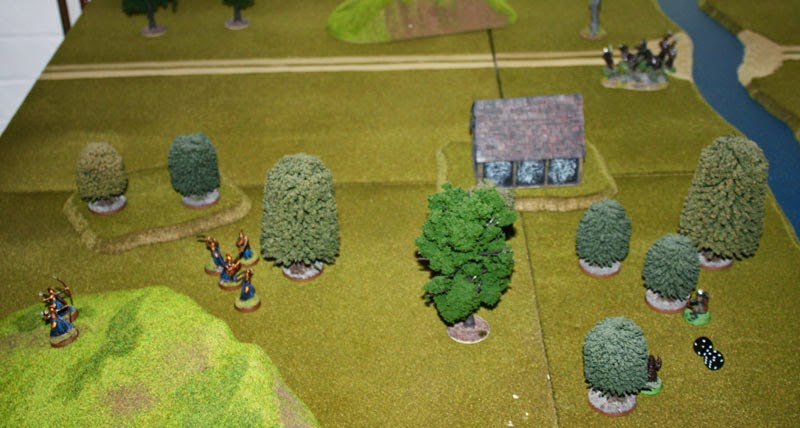 Turn 3 - Elf Priority
The elven warriors advanced towards the orc ambushers with the intent of killing the archers as quickly as possible. The two elven bowmen made it to the top of the hill in time to see the orc archers loose two more ineffective shafts at their leader.

The orc main party advanced around and over the fallen idol, set there to spiritually guard the ford, towards their kin in order to aid them against the elven threat. The two archers shot at the elves again but still failed to find their marks; the trees were obviously protecting them.

Turn 4 - Elf Priority
The elven warriors moved rapidly towards their foe and began to flush the orcs out of cover. The elven sharpshooters on the hill saw their opportunity and were able to bring down one of the orc archers - first blood to the elves.

Swan-feather fletched shafts alerted the orc leader of the counter-attack and he sped up his advance towards his archers, who now retreated from the oncoming elven force. The last remaining archer let loose his arrow but even though it hit, it failed to penetrate the thick elven armour.

Turn 5 - Elf Priority
Sensing a swift victory, the elven warriors rushed into the clearing beyond the glade and formed up to take on the orc threat. The elven archers spotted the orc leader advancing through the woodland but their shafts were to miss him.

The sight of the hated elves spurred the orc leader to advance his wariors into combat with them - they had numbers on their side to overcome the natural fear of their foes. Spurred on by the arrival of his fellows, the lone orc archer tried to pick off an elf at the edge of the encroaching combat - although the dart flew true, the thick elven armour saved the warrior. 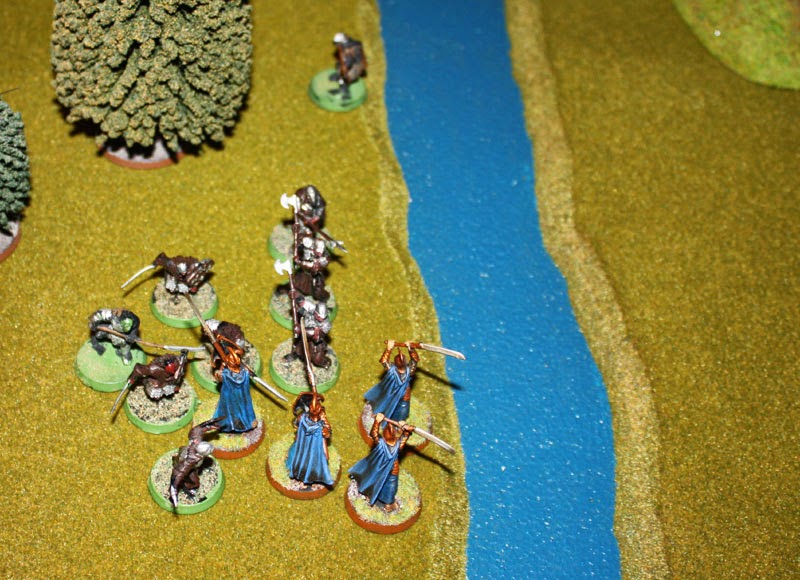 Turn 6 - Elf Priority
Now that the elven archers had a bearing on their enemy, they loosed more shafts into the small copse. Their aim was true, but the orc armour turned their points.

A fearsome melee erupted by the river, with each side trading blows, but the superior numbers of the orcs began to tell. One of the heavily armoured elven spearmen was cut-off from his brethren and surrounded by four orcs; he was cut down in his tracks. 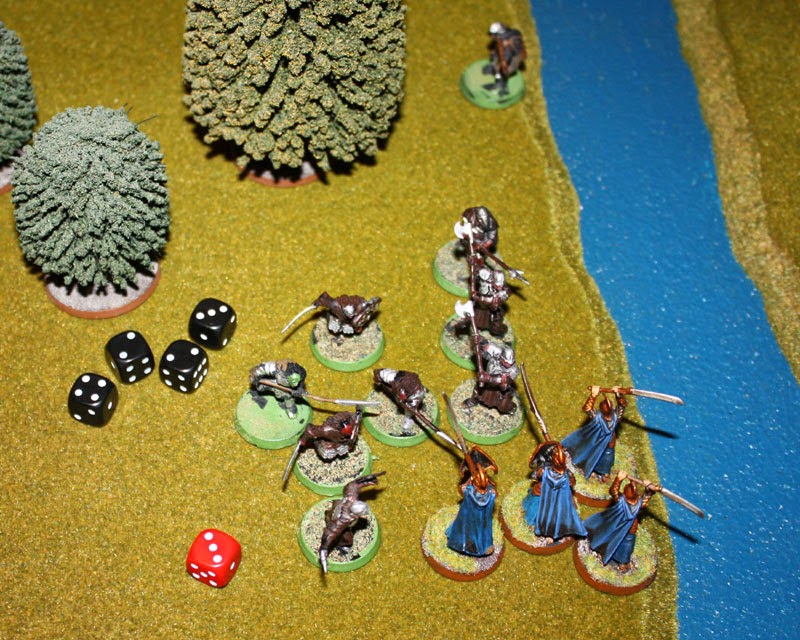 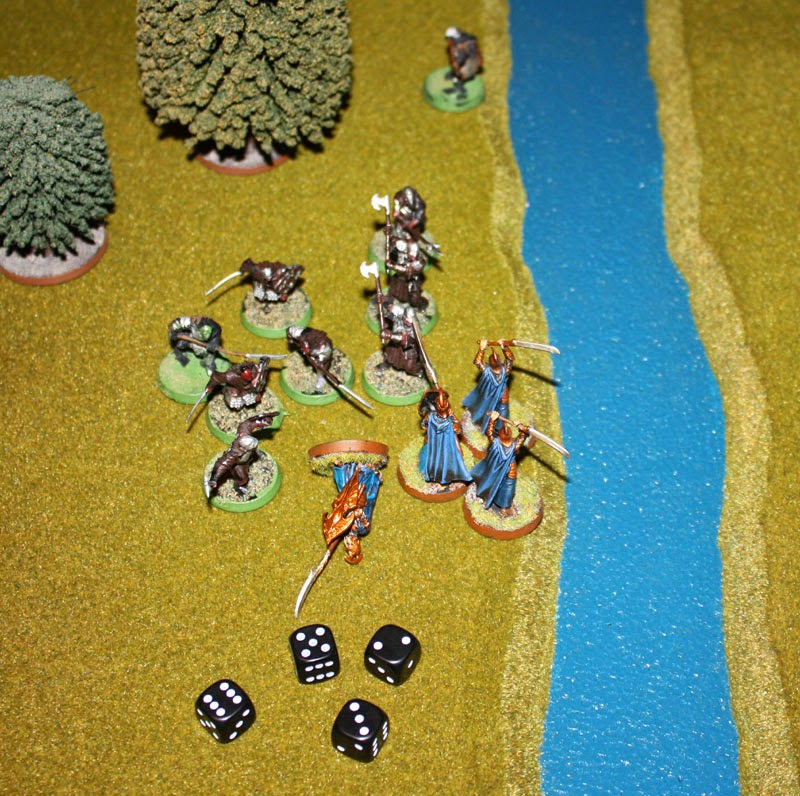 Turn 7 - Elf priority
The two warband leaders faced off in the ensuing fearsome melee but neither managed to land a telling blow. Their troops fared better as an elf and an orc fell to the others' blades. 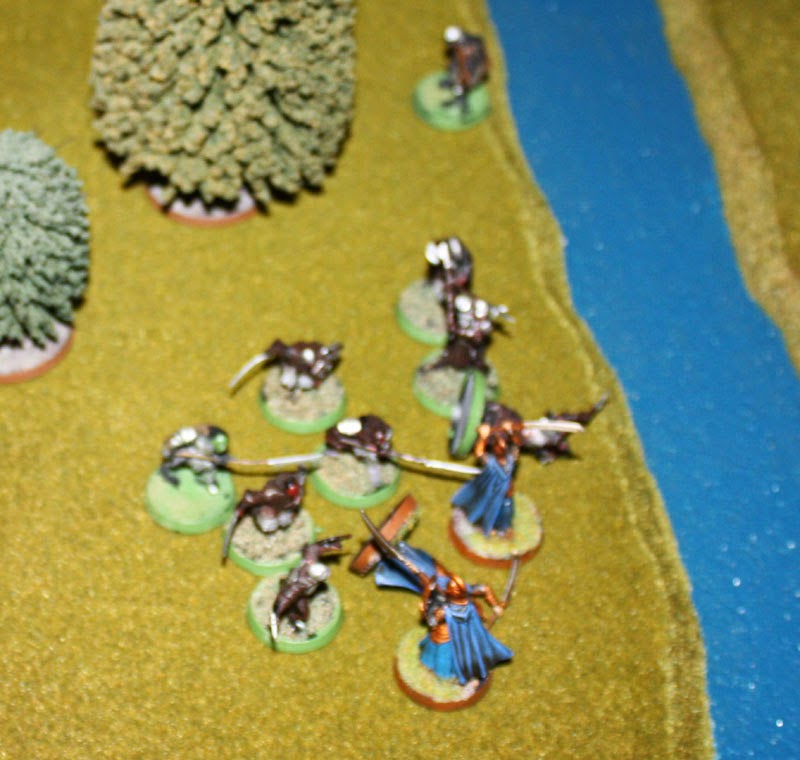 Turn 8 - Elf Priority
Elven superiorty in hand-to-hand combat began to tell, as another orc warrior was cut down in the raging fight. The orc archer, after seeing one of his nearby comrades being chopped down, decided to shoot into the melee to incapacitate one of the elf warriors and thus save his own stinking hide. Fortunately for his fellow warrior orc armour can be quite effective at stopping shafts. 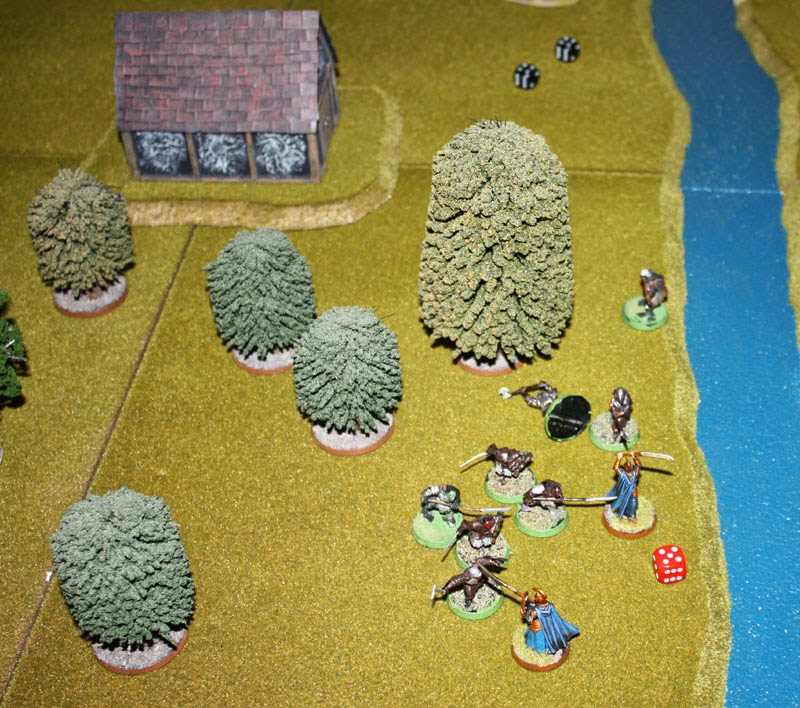 Turn 9 - Elf Priority
Sensing victory, the elven commander hurled himself back into the combat and was able to land a killing blow upon the orc leader. Luckily for the orc commander the Fates smiled upon him this day and the blow that would ordinarily have felled an ox glanced from his armour causing nothing more than a few bruises.

Turn 10 - Orc Priority
The wild toing and froing of the melee meant that blades flashed in upon the two remaining elf warriors. The orc leader managed to land a killing blow upon the elf leader, but the Fates were also on his side today as the blow glanced harmlessly from his shield. The two elven archers on the hill watched in dismay as their leader rocked upon his heels under the force of the last blow, but their groans turned to cheers as their leader's spear gutted the orc leader whilst he gloated over his stumbling adversary.

As the point of the spear exited from the orc leader's back, the rest of the orc warband turned tail and fled the scene. 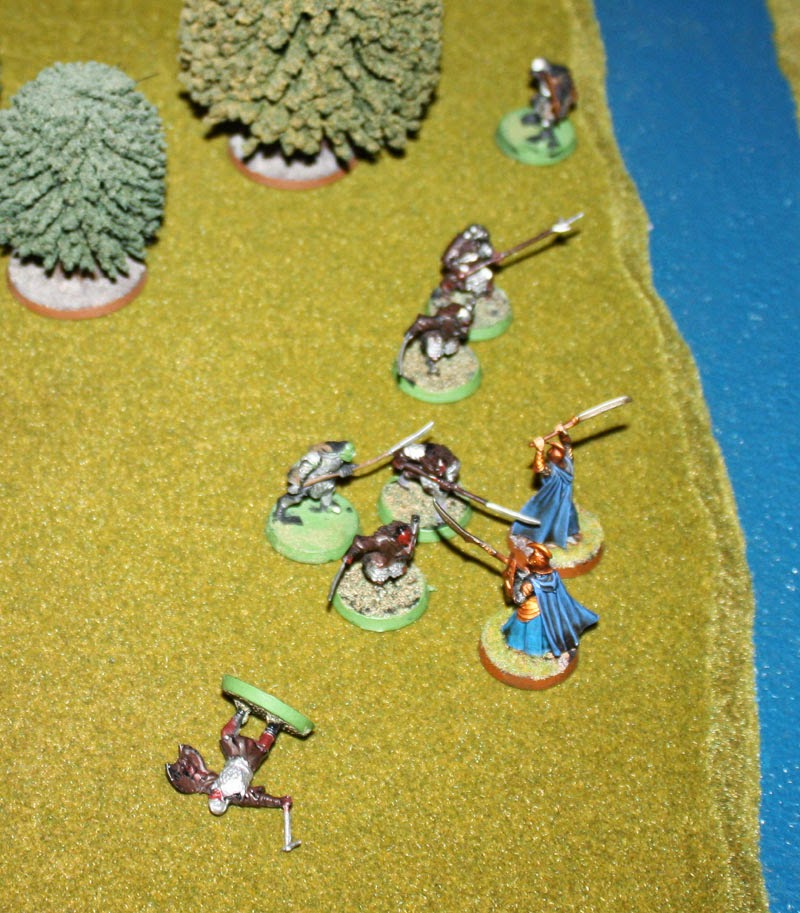 The elves lost two warriors to the orcs' leader and three warriors. Neither side was broken, so a result could not be called.

This was initially going to be a battle to the bitter end. However, as the orcs were beginning to fall quite rapidly to the elves towards the end and Alex was beginning to get a little frustrated as I was helping Nick a little, I decided to cut it short at turn 10 (when we were at Turn 7). This turned out to be quite fortuitous as the results of the melee in that particular round gave a natural break-point to the game - the death of the orc leader.

Even though the elves probably won the moral victory (killed the orc leader and killed more points worth of enemy), the next turn would most likely have seen the elves swamped again and Nick's rolls could have been better - he had had atrocious runs of low numbers (especially with Priority - only winning one roll in nine) but the combats were due to end with the elves surrounded and therefore classed as Trapped. I decided to call this game a draw due to the tears on one side and the spectre of teenage grumpiness on the other.

After the game had been cleared away, both boys cheered up a little and said they wanted to play again soon, but Nick wants to be elves next time.
Posted by Little Odo at 14:05 1 comment: