Another early posting today as most of the work had already been done on this over the weekend.

The final Robert E Howard character I have a comic collection for is Conan. Actually, make that two collections as I have one for Conan and another for King Conan. I will list these separately, so this post is primarily just for the Conan series.

Like the Kull and Solomon Kane collected series, Dark Horse did the same with Conan; in fact  Conan was the precursor to the other two collections, so really I should have featured him first, but decided to save the best, in my opinion, until last. As per the other collections, I will read the colour Marvel reprints, followed by the Savage Sword black and whites, and then the Dark Horse written monthly runs, mini-series and one-shots. Hopefully I can remember to jot down the adventure hooks for possible future use.

First up are the Marvel reprints...

The Chronicles of Conan : 34 volumes

These volumes collect all of the Marvel monthly run comics plus a few other one-offs from Savage Tales and the Conan Annual. I didn't really read too many of these as a kid except for a small British  pocket digest sized limited run that were in black and white as I was more interested in the Savage Sword stuff - it was something about the way they were coloured that turned me off of them. However, these new reprints have been remastered (although I think later on as time on the franchise drew to a close they decided to stop with the recolouring just so that they could get them all released in time - I will check that as I read through them and report back on it in a later post).

The Conan comics franchise has now returned to Marvel and it looks like they are reprinting them all again! I am not too certain exactly what is happening there though, so may look into things a bit more in the future, but the release of so much Conan stuff may be to tie in with a future Amazon Conan TV series I have heard rumours about. Added to the Amazon Lord of the Rings 2nd Age prequel series and the Judge Dredd series due for release over the next few years, I am going to be spoilt for choice as to what to watch and actually happy to switch the TV on for once (although, I will undoubtedly wait for each whole series to end and then watch them at my leisure like I currently do with Game of Thrones).

Next up are my favourite Marvel Conan tales in comic form. Perhaps, as mentioned above, I didn't get on with the colour ones and preferred the larger format black and white comics? It may also have been that my local corner shop only stocked the UK versions of these particular comics, so were more readily available? Either way, I used to spend many a rainy Sunday afternoon escaping to Hyboria to read of Conan's exploits.

The Savage Sword of Conan : 22 volumes

The paper quality of these reprints is almost pulpy; nowhere near as good as those on the coloured Chronicles. That said, to get this many TPBs out I can see why Dark Horse went down this avenue otherwise we would have seen several more volumes on a medium that is actually more suited to the glossy coloured versions and it would have cost a fortune to produce and therefore purchase.


And now the Dark Horse take on Conan's story...

In this collection written and distributed by Dark Horse are six major story arcs...

It is strange that Dark Horse stopped producing the HC versions of these collections at volume 20 - to the end of the monthly run collection of Conan the Avenger. They were also all released as TPBs and I am certain the Conan the Slayer arc was too, but as Dark Horse have taken down all of the Conan stuff from their site I cannot check (a bit of Google-fu for later on I guess?). Presumably this was due to the usual supply and demand structures they have in place and I guess as time went on, interest in the franchise waned and HCs became too expensive to produce for the limited audience of collectors left? As these were on order for me, I would have received them automatically, but I only informed my comics dealer I wanted the HCs of the monthly runs, so if they did go to trades, then I would have missed them anyway. Oh well.

As with all collections, there are some places where different publications contain different stories. The Omnibus collections featured above contain the stories that were also in two other Conan collected trades that did not fit into the monthly run story lines (they were one-off filler tales).

These two volumes supplemented the original 21 volume HC collections of the monthly runs but some stories were later incorporated into the Omnibus editions. I think I have all of the stories released as I purchased the smaller HC versions of the collected works along with the two volumes above but, somewhere along the line, I may have missed a story or two though, so I will check these out when I get round to reading them in earnest. Volume #0 of the monthly run HCs contained the Conan background story that appeared every 8 or so issues. Volumes #1-20 contained the main story arcs.

Alongside the monthly runs, there were several mini-series released to keep interest in the character going. These I have in both comic form and their collected trades.

I do like these one-off mini-series as they are a pleasant aside from the main monthly story arcs. Likewise, I also like the occasional one-shot story.

I have the FCBD Star Wars/Conan comic but I am not sure about the Age of Conan comic - I have a small half-sized limited edition comic called The Sons of Bel, but until I can dig it out I cannot say for certain if it is a different version of the same comic. The Mask of Acheron is a comic book version of the Conan film.

As mentioned in previous posts, I am not a great fan of cross-overs but I was willing to make exceptions for other Robert E Howard characters. Red Sonja I am OK with but somehow the Groo one seemed right due to its comedic content. As I was unable to get hold of the Wonder Woman ones (even though I ordered them from my comics dealer) I cannot pass judgement on that story; I have a feeling it might have been OK though - something to hunt down when I have the spare cash maybe, just to complete the collection?

Alongside the comics and their collected trades etc. Dark Horse also released a couple of supplementary hard cover books. I bought these (as well as a lunch pail for my eldest son when he was little for a bit of something different). These books fill in a few gaps of otherwise uncollected items and tell the story of Conan as a book, comic and film character. Both are well-worth getting hold of, as well as the Dorling Kinderley hard cover book by Roy Thomas called Conan : The Ultimate Guide. 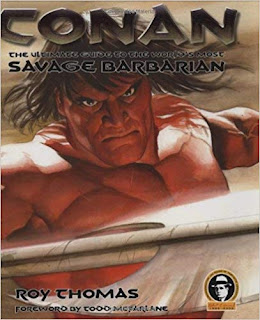 The last book I threw into the mix as I bought it at the same time as when I collected the Dark Horse comics and books. I am well aware of the dozens of other books, tie-ins and other paraphernalia surrounding Conan from other publishers, but to add these would have been a step too far for this little blog post which was primarily concerned with my actual comics collection.

Tomorrow should see me completing my comics collection posts and then I have a few miscellaneous posts lined up (games played, places visited etc. if all goes well). If the weather sorts itself out after the weekend, I am hoping to get back onto finishing the preparation for my Lord of the Rings miniatures (the undercoating and gap-filling stages). I may then sort out my miscellaneous fantasy miniatures and get those prepped and ready for undercoating. Lots still to do and report on before I even get to painting and gaming with them.