As part of my ongoing project to get my Hommlet campaign off the ground, I have modified and updated the map of Nulb from the T1-4 - The Temple of Elemental Evil campaign module.

First up is the basic map of Nulb with details as per the module... 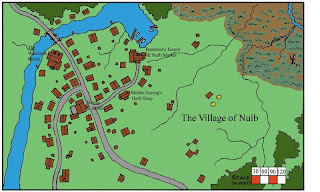 The second map I have added in numbers for each of the other locations in the village... 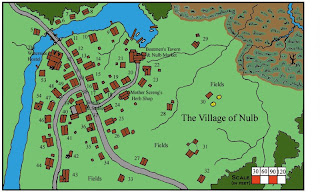 I have pruposefully left out the name of the river and the directions to other villages on this map as I am not convinced by the labels on the original map from the module. I may add these in at a later date, as well as a small area map that details the module's immediate environs. This should include the whereabouts of Verbobonc, Hommlet, Nulb, the Moathouse and the Temple itself. The distances given between these locations as well as the names of the roads that lead to them are very confused between the original T1 and the subsequent T1-4 modules. I need to sit down and work out what will work best in my campaign. All of these will no doubt be renamed in my campaign as my campaign world is being worked out at the same time.

My next aim is to flesh out Nulb to the same extent that Hommlet was detailed within the original module, to make for a more believable village. This may be a little more difficult than I imagine from first impressions as I have to get the power play right between several factions within the village.

I have also almost finished tidying up the maps of the Moathouse and the dungeon from T1 but as these will contain GM specific keys on those maps I will refrain from publishing them on here - I have no desire to let my players know what lies in wait for them!

Finally, to flesh out the game world when it comes to actual play, I am thinking of ordering up a load of miniatures for it - there are many villager figures that I am interested in, as well as figures for the other denizens of the adventure. Whatever I decide upon, I will display them in their painted forms and where I got them from for you to take a look at.

Again, if anyne would like a copy of the slightly larger original versions (rather than these cut down JPGs) or the psd I am working from, drop me a line at littleodo at gmail dot com and I will be happy to forward them onto you.
Posted by Little Odo at 19:21