I didn't get much done this weekend - just another fantasy stachoo. Here's a picture of the last two entries about to come to blows over the fallen idol objective.

Here's a better picture of the statue itself. Its another of the Games Workshop Lord of the Rings scenery set. There are two or three more to be completed, but they make good fillers for when I get little time to paint. 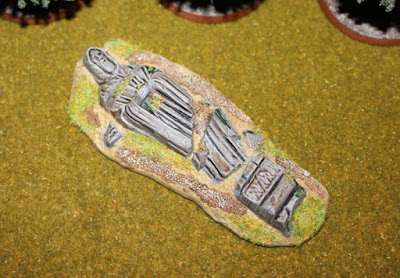 I decided to give the blog a little make over after the New Year celebrations were over.

The first thing I decided to change was the title picture, and I will try to change it every year or if a particularly nice picture turns up on my camera - I am not a good photographer and if I get a good photo it is more through luck than judgement.

The first picture was of Castlerigg stone circle near Keswick in Cumbria, taken whilst on holiday in the Lake District in 2005.

The latest one is of a 1970s mock up of a Roman milecastle at Vindolanda. The Roman castle photo was taken on a trip to Hadrian's Wall during the summer of 2008.
This evening I made a few more tweaks to get the colours to match across the site. I may go the whole hog soon and change the template to something that looks a little more ordered.
Posted by Little Odo at 21:25 No comments: