The Fellowship of the Ring

I had a lot of other stuff to get round to today, so I went for a quick win with the hobby stuff. The box set of the Fellowship of the Ring is the subject of today's snips, files and glue. This was one of the first sets I bought from Games Workshop but, like what happens to so many other gamers, it took me nigh on ten years to actually get around to opening it. 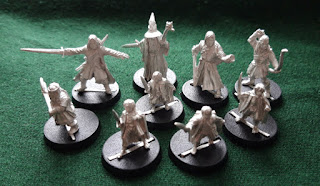 These were actually quite easy to put together as all of the figures are single piece sculpts. There was very little flash on these, so all in it took maybe half an hour for me to complete. Most of the other days I have had the best part of a couple of hours in which to get some work done, so at least I managed to finish a set in the limited time I had available today.

Unfortunately, when I looked at the contents of the box I found that I had quite a few doubles as many of the figures were presented with the Battlegames in Middle Earth magazine. I will see what I can do with the doubles; perhaps they can be converted to be extra versions of those particular characters or maybe just painted as a separate force in a scheme that is different from the films and/or books? It would be interesting to points value the Fellowship and see how they turn out as a complete SBG force. I also have spares of Faramir, Imrahil and Eomer - I wonder how the journey would have gone if any (or all) of these were substitued instead of some of the other major characters?

The Gandalf mini is the only non-double now I have checked again, but he is a nice addition to my collection - I have four Gandalf miniatures now: Gandalf the Grey (Fellowship set), Gandalf the Grey (Khazad Dum set) and Gandalf the White (plus a mounted version). I would like to get the wizard mounted on a horse as that is such a lovely sculpt.

Tomorrow I am hoping to take a fresh look at the remaining Easterling Kataphracts. A few ideas are forming, so hopefully I can bring them to fruition tomorrow.