Although the Moria goblin hordes have been completed (see post from a couple of weeks back), their hard-hitting cave troll brethren needed to be constructed. These are large multi-piece figures that require some modelling skill to put together. Like Shelob, these took a little while to get right but, again, I got away without having to pin them - they will need a fair amount of putty work to smoothe out some joins though.

First up is the leader of this little battle of miscreants; Buhrdhur, Hill troll Chieftain. I absolutely adore this mini. It just oozes power and menace. He will make a good leader for any force of bad guys, be they goblins, orcs, evil men or even other trolls. 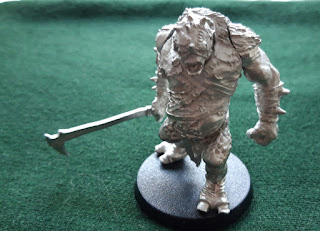 I have been thinking on how to use the four troll miniatures I have in my collection; obviously they can be used for a standard Moria army but as Burdhur is a hill troll I can also use them as a small band of his brethren. Not sure on a paint job yet, but I'd like to paint them so that they can have multiple uses. Here are the three variants of Cave Troll I have (not sure if there are any others)... 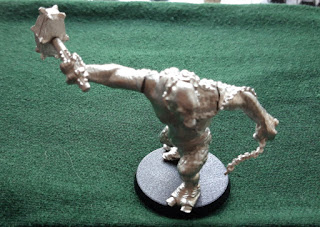 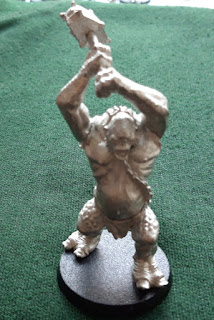 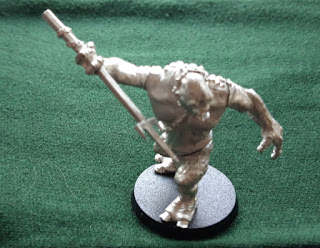 It seems, when looking closely at the sculpts, that there are two body variants of troll based on pretty much the same set of legs (Buhrdhur's legs are amended slightly due to what he is wearing and the base tab has moved to the other foot). Unfortunately, the three Cave troll bodies cannot be inter-mixed with the way the legs are done for Buhrdhur to give more variants, but I think four is enough for any army.

I am wondering what type of putty to buy to sort these gaps out and to give the joins extra strength. I normally use greenstuff but I am not really that great at pushing it around. I have heard there is a grey putty called Procreate (?) Perhaps that would be good to use - especially if it is more pliable than greenstuff.


Whilst gluing up all of these miniatures, my other piles of fantasy figures have been looking at me imploringly. I will get around to those too after I have made inroads with painting the LotR lads and lasses. However, this did not stop me from procrastinating whilst I should have been prepping - a New Life Resolution (as opposed to a New Year's resolution), starting this January after three years of life crappiness, was to procrastinate less - I am getting there, albeit slowly. At least I am now catching myself doing it and positively changing my attitude when I find myself doing it.

Anyway, from the figures I recall peeking at me from the lead pile I thought about creating fantasy armies that use the Games Workshop Lord of the Rings miniatures as a base, but with the added bonus of also using other manufacturers' figures in a parallel universe to Middle Earth. Using only the slotta based figures from my pile, this is kind of what I came up with (more will be explained in later posts if unclear what these miniatures are)...

Kingdoms of Men (lawful/good)...
Kingdoms of Men (baddies)...
Other armies...
Once I have got under way with painting my LotR miniatures, I will look at prepping the above figures to fill gaps in my schedule and for when I get bored doing the same thing all the time (I can sometimes get caught in a rut when painting, especially when trying to complete armies that are very samey like Gondor or Rohan).