Rumours had it that the new TV series about to be produced by Amazon was to be set between The Hobbit and The Lord of the Rings and focus on a young Aragorn, but it may well be set way before then ... in the Second Age if the latest released map and stories circulating the blogosphere are anything to go by. 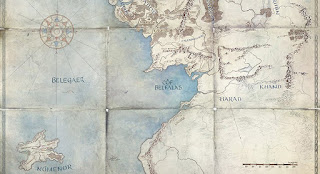 As can be seen from the map above, Numenor still exists. It hasn't been sunk, Atlantis style, yet. This can only mean a story set when Sauron is walking the earth in his "friendly" style and sweet talking the various races into their own enslavement of the One Ring by crafting their own sets of Rings of Power.

This could prove to be rather fortuitous for us gamers as I am sure that there will be a whole new raft of heroes and heroines to meet, as well as new races of people to greet, on our tabletops. The vista of new gaming stuff could be as boundless as those conjured up by Peter Jackson et al, New Line and Games Workshop for the Third Age trilogy of films. Let's hope we have a new Renaissance in gaming Lord of the Rings.

As it is Amazon producing this series though, will they keep Peter Jackson's continuity in the look of men and elves from the Second Age snippets we see in the main trilogy of Lord of the Rings films, or will they have their own vision? Will we get to see Elrond, Gil-Galad, Elendil, Isildur, Galadriel, Celeborn, Thranduil and Legolas to name but a few of the most well-known characters of the age? What will Sauron look like in his corporeal form? Will we get to see the arrival of the two Blue Wizards and the return from Aman of Glorfindel?

This is tantalising news and I for one am looking forward to this series immensely. I hope that a large gaming manufacturer, with us gamers in mind, gets the contract to produce the miniatures required. If it is Games Workshop again, as they seem to be the ones with the most world wide coverage and financial clout (according to their latest profits announcements), will we see a further raft of rule books and source material for the Strategy Battle Game based in the Second Age?