Whilst building my armies for Lord of the Rings : Strategy Battle Games a few years ago I came across a company that sold unreleased miniatures from the Games Workshop range. As a trial to see how the company worked and to get some minis that would fill a small gap in my Rohan army I decided to order some of their dismounted horselords and a leader for them on foot. These were presumably released to cover dismounted Sons of Eorl and Eomer. 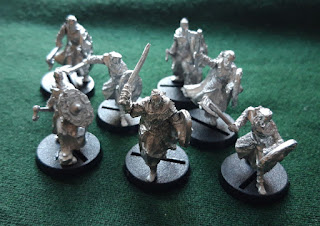 The figures themselves are not the greatest of sculpts (they may paint up better though) but will fill a gap until (hopefully?) Games Workshop release the same in metal so I can replace them. Each figure consists of three parts; a main body, a shield or left arm and a right arm with hand weapon. The joins are pretty awful and needed a lot of work to file flat so that they could adhere when glued. They will still need a fair amount of putty work to complete, and I may have to go back and pin the arms on if they happen to fall off whilst doing so. To add to the woes of prepping these figures, they also come without bases and there are no slotta tabs to attach them to slotta bases, thus making basing a bitch as they all have tiny feet and thus only small areas to adhere to the bases. I wound up pinning those that are only on one foot so that they remained upright and to give them a stronger fix to their bases.

In hindsight, I should not have bought these miniatures for two reasons: firstly, and most importantly, they are not official figures and as such infringe upon GW/Newline etc. copyrights; and secondly they are not that great as sculpts. They fill a gap but not well enough for me. I don't think I will be buying any more figures from this company.

At the same time, I also managed to complete a Rohan captain figure. I have another one or two of these in my figures boxes already made up, so I have plenty of captain type figures but Springinsfeld mentioned a couple of Ral Partha miniatures in the comments of yesterday's post that I may very well look into - these are not like the Sons of Eorl miniatures trying to fill a gap, but just happen to look like they will fit in with LotR Rohan faction minis. 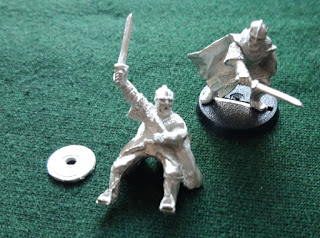 The difference in quality between these captain miniatures and the unofficial ones featured above is very evident. You may have noiced that the mounted captain is not on his horse. I am wondering what to do about mounting him on a horse, i.e. as he is metal, the standard Rohan horses are prone to break very easily with that extra weight. I put the Gondor metal knights onto Warlord's Pike and Shotte horses, so I may look around to see if there are any other maunfacturers that make horses that would suit Rohan rather than Gondor.

Also, should he be for the general eored or shall I make him part of one of the elite units (Erkenbarnd's Redshields for example?). This unit assignment will work fine for the mounted capatin as his shield is separate but not so easy for the foot captain as his shield is an integral part of the miniature and not easily changed. I will think further on this when I get the entire army out on the work bench again to stat up and begin painting.