The weekend sees a bit of a slow down for my hobby as that is when the kids are away and I get more time for myself to do social things. Therefore, hobby time at the workbench drops but hobby time at friends' houses increases a little (and other parts of my social life too). The D&D stuff I played quite a bit until last year and still touch on from time to time (this Saturday just gone for example I played as a 4th level ranger in a 5e dungeon campaign that takes place sporadically - I have now played him on two separate occasions, and hopefully a few more times in the coming months) being a prime example.

Anyway, back to my daily output for Lord of the Rings. Today saw me hit another smallish faction that I have been itching to complete for some time - the old style metal Knights of Minas Tirith. When I first got these I attempted to put them onto the horses supplied in the box, but the legs on them broke rather rapidly (most poses only have one point of contact with the base so this makes them very susceptible to breaking what with the extra weight of a metal miniature upon them) and would never glue up again properly. So, I decided to look around for alternative mounts that were more solid and able to cope with the weight - welcome onboard the Warlord Games Pike and Shotte horses. I may have mentioned this solution previously but, if not, I have to thank joe5mc over at The Renaissance Troll for his suggestion. I got the horses glued up over the weekend and completed the riders this morning.

Here are a few pictures of the dozen Knights of Minas Tirith I have made up using the above method. Looking at them though, and the pictures on Joe's blog, these do look more like a scouting patrol than full blown heavy impact knights. So, these metal ones will become a scouting force whereas my plastic versions (along with the Swan Knights of Dol Amroth) will become the hard-hitters... 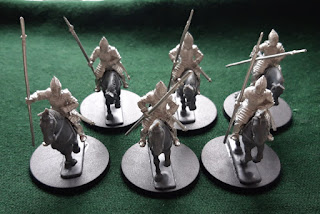 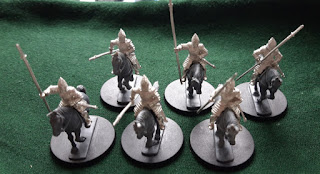 Again, like the Dol Amroth knights, they have lances sticking out all over the place, so will be difficult to store. Hopefully those couple of trays of pick and pluck will do the trick.

To lead these fellas into battle, and to carry on kind of fulfilling his scouting/rangeing role, I have Faramir in armour along with a banner bearer... 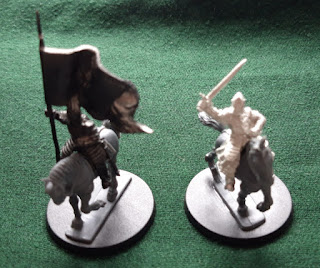 I did have these all lined up in formation on a shelf earlier today (whilst the horses dried I plonked on the riders to see what they would look like) facing a dragon miniature that I got from a magazine many years ago. It looked brilliant on the shelf and I wish I had photographed it. Perhaps I will do so when they are all painted and I have some decent scenery set up. I could just see the story opening up in my head - a brave knight with his bannerman and a dozen stout warriors hired to hunt down the culprit that was stealing cattle and farmers - when they meet it they are surprised at its size and baulk at tackling such a foe. Then the knight remembers his vows, girds his loins and charges the beast beside its lair, only to discover that it is a mother with young to feed - the dilemma!


I think this could make a fabulous Dragon Rampant scenario - I may play with it and stat things up once these are painted and ready for action - maybe this could be my first scenario? Whimsy aside, I think these will make for another great unit for each of my three fantasy tabletop games.