This post is a bit of an ad-hoc one as it came to me as a bit of a surprise. The girls took themselves off to the cinema this afternoon and my eldest went out to see a football match with his friends, so I was at home with just my youngest son for company. As it is Easter, we were just kicking around the house in a post-chocolate egg trance and at a loss for things to do until he suggested we played Risk (he had seen the box on top of the book shelves), At first I thought "Oh no, not that old chestnut", but then I realised it would be an ideal time to teach him how to play the game and dust off something that hadn't been touched in nigh on 25 years. 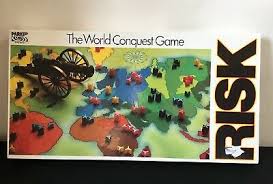 My version of the game dates from around 1978, and seems to be an American version (so the picture above is merely representative of my set which is battered beyond belief and ineptly repaired. It had been played to death during the eighties and then only once or twice in the nineties before being consigned to the top of the bookshelf.

As it was a training game, I decided to not play the Allies rule and just do a one-on-one straight up fight. We diced to see who went first and this roll-off was won by my son (which turned out to be an augury of the shape of things to come). We both grabbed 40 army pieces and I split the deck of territory cards randomly. My allocations were fantastic - I had Australia and Africa all bar one territory and half of South America, with strategic territories in Asia and North America. I thought I was going to win this easily and therefore use it as a good way to demonstrate a winning strategy.

My son went first and took several of my territories without losing a single dice roll (almost all were one-on-ones). My turn saw me reduced to just taking 5 armies from the box to add to my deployments. I went to take Australia but lost every attack. I tried a couple more attacks in order to at least grab a card and lost all of those too. No territoried gained, no card and no losses for my son at all.

The second turn went pretty much the same way, with littlun' taking more of my territories without loss on his turn, but I was able to take Australia at last with large losses again. This gave me a bonus of two armies per turn but by now I was down to just 10 territories on the board! After fighting on for a couple more turns my situation hadn't changed but the arrival of a couple of sets of cards handed in meant the padawan now had ample manpower to storm all over the board. I was able to stop him gaining a continent each turn but my territories eventually got taken (including the whole of Australia) until I was down to around 5 territories. I played out my final ineffectual turn (turn 6 as it happens) and surrendered.

I think that this is the fastest I have ever been defeated at Risk, even when I have been up against more seasoned opponents. I just couldn't cope against a typical ten year old's luck with the dice.

Still, it was a great game, he learned a lot and we passed an hour having fun.