After much deliberation over last weekend, I decided what to do with the resin shields I had made; one set will be for Erkenbrand's Redshields, another for Grimbold's Helmingas and the final set for Elfhelm's cadre. I don't think I currently have enough figures in the plastic and lead pile to make up all three of these units though, so one set of the shields, for Elfhelm's eored, will remain in the plastic pile for a while longer.

I had enough Warriors of Rohan figures for Grimbold (see yesterday's post on Grimbold's Helmingas) and for the mounted contingent for Erkenbrand's Redshields but I am not sure about where to get those I want to use for Elfhelm. Perhaps I can just use other figures that Eomer, Theodred and Theoden use in their units for now until I can afford to buy a couple more boxes of Rohan stuff? But, if I do re-use the standard eored miniatures for Theoden etc. they won't be differentiated by a unit encompassing shield design when used as part of Elfhelm's unit. I will see when I finally get them all out onto the workbench at the final prep phase.

Anyway, enough chatter, onto Erkenbrand's mob. As I have now run out of Rohan miniatures to use for the elite squads, Erkenbrand's unit will only be represented by a mounted contingent at the moment. I have tried to do a little bit of conversion work by swapping a few weapon hands around and giving the unit a set of my custom made shields so they all match and there is some coherence in the unit. 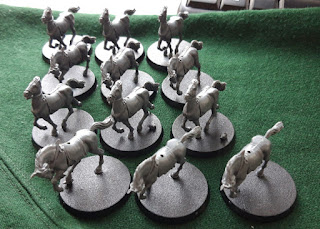 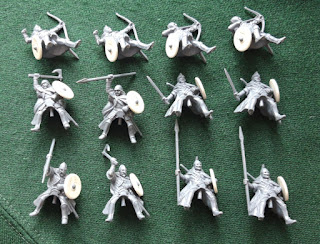 You can see the two minor conversions in the second column of riders from the left - I swapped the axe and spear hands around. They all have the resin shields I had specifically designed for the purpose of designating individual units.

I think that is all of my Lord of the Rings miniatures de-sprued/unboxed and based in readiness for undercoating. So now I just need to wait for the weather to improve a little before hitting the garden for a few sessions with the spray cans. I have some old cans in my paints box, so I hope they will still do the trick.

It will be at this stage that I will create some spreadsheets to list what I have so far and their associated points values. I will also take the opportunity to perhaps begin working on some Saga and Dragon Rampant armies just to see how things measure up.

If I can get a good few sessions with the spraycans in the garden, then I am hoping the next phase will only take a week or two to complete. After the undercoating and statistics taking I will get onto ordering the units into some semblance of a painting queue and get stuck into them with the brushes. I have a few already painted (maybe 10% of them), so may look at finishing some of those units first if there are any gaps. Plastic figures will be block painted and "dipped" but I may have a go at proper shading/washing with elites and heroes. I will have to see how my eyes hold up to the task ahead as they are still deteriorating quite rapidly.