We plough the fields and scatter...

This week I managed to paint up half-a-dozen peasant farmers. Once again, these are 1970s Citadel miniatures and as such lack a lot of detail. However, I think I have managed to make them look as good as I can. 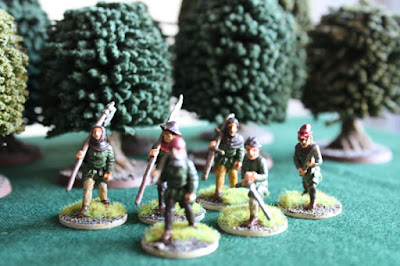 I have posed them as if they are on their way back from a hard day in the fields and en-route to the local brew house for a well-deserved pint. 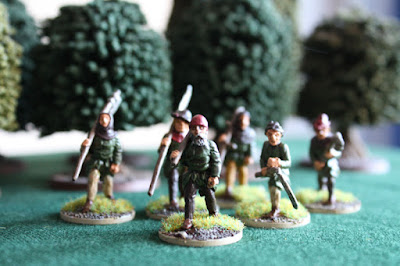 This week saw the delivery of the last few giants and trolls I ordered from EBay. I have managed to strip the old paint work off of half of them already (a messy business) along with the paint from some thief adventurer types from my back catalogue.
Next week should see the next contubernium of Romans (yes, I am getting a bit bored of painting them as you probably are of seeing them, but the numbers in my backlog are slowly diminishing).

It's those pesky Romans again

I've had a very busy week this week, so not much was achieved on the painting front. I managed to finish off the fourth contubernium in my Early Imperial Roman century and the signifer. These guys are in the middle of throwing their pila at the enemy. This century is coming along nicely now, and I am hoping to finish it within the next few months alongside some more of my older fantasy minis.

Here's a picture of the century to date; 4 contubernia, centurion, signifer and cornicen.

I only have two more officer sorts to realise now - an optio and a tesserarius (not to be confused with those little cubes that make up mosaics). The optio was second in charge in the century and "led" from the back. He was there to keep an eye on the rear rankers in case any tried to run away from the face of the enemy. The tesserarius was like an NCO; he was entrusted with the night watch and passwords for the century. Both of these minis will have to be conversions as plastic versions of these do not come with the box sets. I have some images on which to base an optio but have no idea on the tesserarius. I guess I'll just have to make him better than the rank and file, but a little different to a decanus - perhaps I'll just use a normal ranker but paint his tunic red to make him stand out?

Next week should see a few more villagers completed. I have half-a-dozen farmer/woodsman type minis that came from the same range as the rest of the villagers to date.
Posted by Little Odo at 18:34 No comments:

This is a mini I have had laying around for a long time and I have never plucked up the courage to paint it. It is some sort of two-headed troll produced by Citadel Miniatures back in the 80s. I decided to call him Gog-Magog after the two giants who supposedly stood guard over London in the dim and distant past. There are statues of them around London , the most famous images being those in the Guildhall. 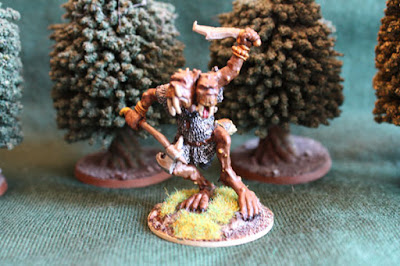 I have been doing a bit of bidding on EBay these last few days to buy some other trolls to keep him company. I own a few others but decided that the four I already have wouldn't make a decently sized task force to fight against the good folk of my fantasy world.

OK, I have managed to get used to the camera a bit more, with the close-ups coming closer but the focus is still a bit out. This is due to me wobbling whilst the slower shutter speed allows the closer focus. Guess I'll need a tripod to resolve that issue.

The picture below is of the third contubernium plus a cornicen to sound out their orders. This unit is different in that it is the first lot of legionaries armed with a pilum. This photo allows a better view of how I have painted their tunics; I decided to paint the legionaries' tunics with a neutral raw woollen colour as opposed to the standard "Hollywood" red. I can't imagine the Roman army paying out extra to dye the tunics, especially as red always fades to pink when weathered - not a colour to strike fear into the hearts of their enemies. I have however made a concession and painted the officers'/command group's tunics red - they could afford to spend more on their kit. The decanus of each contubernium has the same colour tunic as the other legionaries, but with the addition of a red stripe (and his shield has a bronze rim as opposed to the steel rim) to make him stand out . 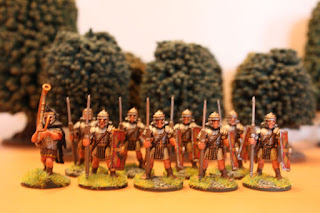 To keep this site up-to-date with all the finished Roman minis, here are the completed ones in all their glory.

Next up I have decided to go back to work on my fantasy figures. I have a "nice" monster to paint that will strike the fear of the gods into any who face him/it. It is an old Citadel mini from the same period as the townsfolk I have shown previously.

Bank Holiday weekends are great for doing extra bits of work on the hobby front. After completing the second lot of Romans I was able to complete a few more of my very old Citadel miniatures from the 1980s. These are from the same period as the villagers in the post below. 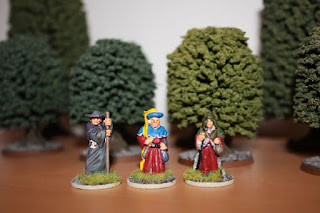 This photo is a bit more in focus than earlier ones, so I think my technique may be improving - I now just need to get Photoshop sorted so I can zoom in and show them in all their close-up glory. Next up... More Roman legionaries (16 down, 64 + command to go).

Back to the Romans again this week.

I have completed the second contubernium, thus completing 1/5 of a century (it sounds better said like that). The rest of the century are coming along nicely and all minis have at least some paint on them now.

Here's the second contubernium with a different centurion. This chap is all ready for war, unlike his predecessor who was happy on the parade gound. 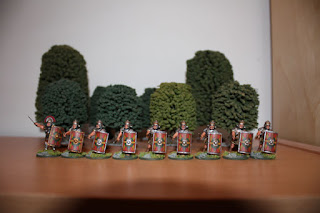 I have also included a shot of the two contubernia together just in case it didn't look as if I had completed two squads with gladius and scutum. 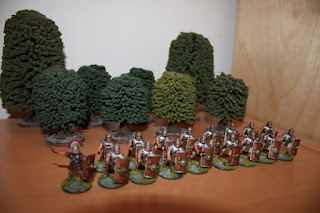 Once again, apologies for the quality of the photos - I will get round to reading the manual on how to take decent close-ups.

Next up should be a few more RPG minis - I have a few travelling types who would be at home in the towns and villages of my fantasy world.