Today turned out to be rather more intersting than I originally anticipated. I started out working on my plastic box set of Kataphracts and then did a side-step onto a quick conversion of one of my eBay bought halberd armed Easterling warriors.

First up is the command for the Kataphracts. I decided to only create a drummer and banner bearer this time as, when I eventually get a second box set, I will create a suitable captain for them. Hopefully I will have read the rules by then to see if a halberd armed one will be allowed. 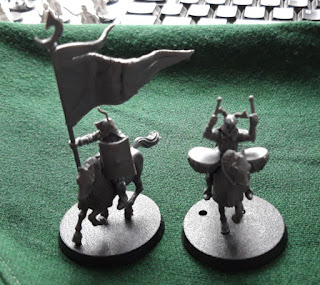 Next up are four Kataphracts. I did these all armed with falchions. 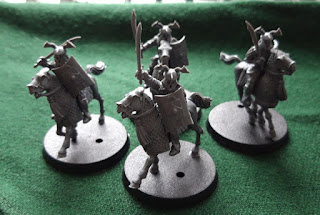 I really enjoyed putting these together. As mentioned in a previous post, the Easterlings really are one of my favourite factions cultural looks wise. They have interesting armour and weapon choices and make for a force to be reckoned with that even Gondor would find hard to defeat.

My final piece of work today was just something I did on a whim. I had already cut the second banner in the box set from the sprue for some unknown reason and decided to try to use it. I snipped the arm off of one of my eBay purchased halberdiers, trimmed the flag staff down a little and this is what I came up with. Simple conversion, but I think it is extremely effective. 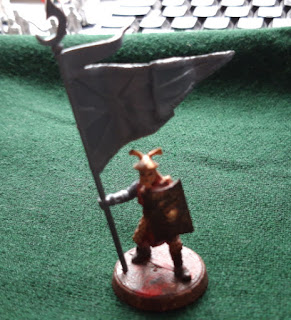 Now to look for a  foot figure or two that can be converted into a drummer, captain and perhaps a warpriest or dragon warrior?