I think Rohan is my second largest force, after Gondor, number of figures wise. Although, saying that, Isengard (if the orcs and wargs are included) may be pushing for that title too. It will be interesting to do a count up once everything is out of its blister/box and onto the work table.

Anyway, here is the original view of the army from two years ago. I think that there have been a few additions to this faction since then whilst I was trying to round out the army to what I originally wanted. I have now reined that in and will get by with what I have here and perhaps one or two small purchases to complete any unit that is a figure or two short...

Rohan Royal Guard and other Elites... 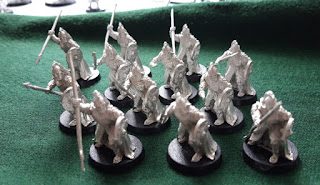 The majority of the blisters shown in the first photo contained Royal Guard on foot and mounted Sons of Eorl. I also bought some unofficial miniatures to double up as foot versions of the Sons of Eorl - they are not the best sculpts in the world, but we will see how they look when painted up fully.

With the Royal Guard I decided to create them as a unit of spearmen. In the blisters you get three subtly different warrior sculpts and six right arms: three with spears and three with swords. I now have a dozen sword arms for my bits box which may come in handy in the future. I will use these troops as King Theoden's personal retinue, but some may double-up for extra duties to guard Theodred (when he was alive) when out hunting down orcs of the White Hand. I double-checked my mounted Royal Guard numbers and found that I only have 10 standard poses, so I will need to grab a couple more to make a full-sized unit. I do, however, have two Royal Guard with longer spears that are presumably meant as banner bearers - I will use them as such to show off Theoden's might. 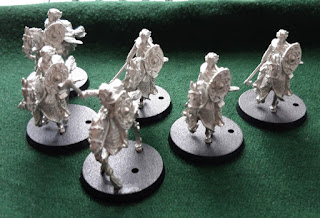 This brings us onto some other elite warriors. As shown above, I have half-a-dozen Sons of Eorl. Unfortunately, when I ordered them Games Workshop would just send a random assortment - hence why I got five of one pose and only one of the other - at the time I would have preferred three of each, but this could work in my favour as an unnamed captain type and five troops? I wondered what to use these for and decided that these hardened warriors would be the right-hand men of each of the Marshals of the Riddermark; so, Theodred and Eomer can be accompanied by them, and perhaps Elfhelm and Erkenbrand?

Heroes of the Riddermark... 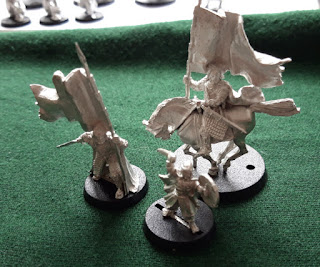 In addition to the elite warriors there were a couple of hero sculpts that needed prepping. Most have already been made up, but Gamling was still in his blister. I now have a couple of Gamling mounted with Standard minis, a couple of him on foot with sword and now on foot with the Rohan Royal Standard. I will probably try to either paint the duplicates differently or try to convert them to get some more unique poses/characters. I would like to get a mounted Gamling without the flag and also a mounted Hama to at least round out the film heroes.

Looking at my collection and names gathered from the books (from memory I might add, so I have undoubtedly missed some - please let me know if you can think of any more War of the Ring era (and a few years either side) heroes from the books/films) I think I can represent the following characters...
Here are some I would like to represent...
I have plenty of miniatures in this part of my collection to make up a great set of armies for the three main rules sets (Strategy Battle Game, Dragon Rampant and Saga) I would like to play. Many are actually painted too, so this may happen sooner than anticipated. Carrying on from the above dialogue, I was hoping to portray as many characters from the film and books as possible. Some thinking and rejigging will be required, but I think I can manage with most of the figures I already possess. I will do a final reckoning when this particular faction ends up on the workbench for a points tally and to see if I need to fill any gaps.