In the Clutches of Shelob

Shelob is one scary looking critter and has the gravitas to back up her presence on the tabletop. This is a great figure but, again, required some fiddly modelling skills to get her right - she took me nearly two days to complete as the legs were so fiddly! 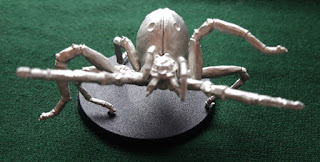 The legs have to go on in a particular order and the joins are not brilliant, so it takes a lot for the glue to hold. I think pinning might have worked better but the issue was deciding where to put the pins and whether the drill could actually get purchase in those most awkward spots. This miniature will definitely be having some putty plonked around certain joins to help them stay together when I get around to completing her ladyship. 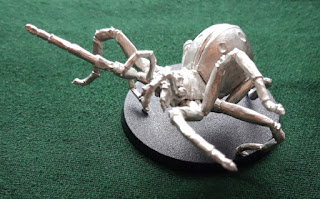 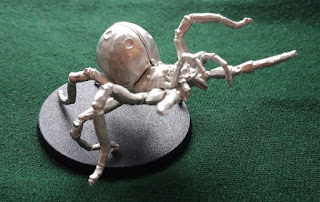 As Shelob still needs a little work done I did not glue her to her base. I will do that when I deem her to be safe to do so. There are just four very small glue points to keep her in place, so I may need to do something extra to keep her secure.

In the same set there were also two little hobbit figures; Sam with Sting defending a bound and prone Frodo. I don't think I will have much need for the Frodo mini but the Sam one will be a useful addition to my hobbit faction. Again, I didn't glue Frodo to the base, so I may use the base for something else. 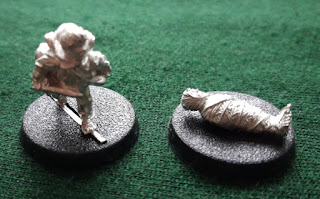 Initially I was not over-enamoured with collecting a hobbit army, but this faction is beginning to pique my interest now that I have several in my collection and knowing that GW have re-released the shiriffs etc. in metal. Hmm.

With regards a paint job for Shelob I am a bit stumped. Do I make her look as much like the film version as possible or do I go off at a tangent and paint her like a Black Widow or some other such real-life arachnid nasty? I will ponder that whilst I am painting my other units.

In the Middle Earth Strategy Battle Game there are also options for more spiders (Mirkwood, Moria and a few other evil factions). These are not quite on the same scale as Shelob (her being the only surviving daughter of the great Ungoliant) but should look menacing none-the-less. I am not interested in the Games Workshop spiders as they don't quite look right to me, but there are a few other manufacturers that produce some lovely looking eight-legged beasts. I may look into grabbing a few spiders in the future when my fortunes change. These could then also be used as a force in Dragon Rampant to support a mob of goblins or some other evil faction.