I am a bit late to this party, but I have seen a lot of column inches on the web singing the praises of this game (and its predecessor Lion Rampant). I have been tempted to pick the rules up for ages, but just never got round to it. I have plenty of RPG and skirmish sized games, what difference would an extra one make? And, as I got it really cheap from Wordery, even if it turned out to be a stinker, it was not much to spend on a couple of hours' reading entertainment - it could always be mined for ideas. 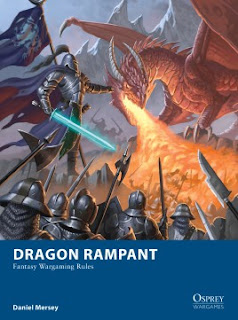 I have only had one read through of the rules so far, but they seem to be pretty good, so the money was very well spent. I would like to try them out very soon, but I will need to see what forces I can actually muster. Luckily each "unit" can be made smaller but still have the points values/stats without too much detriment to the game (at least whilst trying it out). This will also spur me on to sort out a few more minis from my lead/plastic pile and get some paint on them.

I have a fair number of the GW Lord of the Rings figures that could serve as the bulk of a couple of fantasy armies, even if the first game or two would see them in action in an unpainted state. I am sorting out more junk and having a move around in the man-cave this weekend, so hopefully I can set up the gaming board again in readiness for a bit of Dragon Rampant action.


The game itself is open to any figures being used; it is not affiliated to any particular manufacturer or range and the photos in the book itself show a very wide range of fantasy products. This is a great selling point as everyone has a pile of old fantasy miniatures lying around that are screaming out for a fresh lick of paint and some action on the gaming board.

There are a few rules I would consider chaning from the off, but I will play the rules as is for teh first few games just to see what (un)balancing effect changing them would have. The two main ones for me are;

1) The way that the number of dice rolled only changes at half-strength. I would perhaps roll a dice per point so it changes as the unit diminishes in size due to casualties.

As I said though, I will try them out as written first before seeing if my amendments would unbalance the game. Also, unless I missed them somewhere, I would introduce a campaign system such that when a battle is over, casualties are rolled for to see if the warriors/beasts/monsters return in the next fray.

I have to admit I don't really like the idea of "unit" based games for fantasy. Yes, great armies would come together in their legions (or whatever tactical size) to fight over fallen idols, great temples or just for the hell of it, but smaller skirmishes in my mind would just be a tactical free for all with individuals having free rein on the battle field. Dragon rampant has the figures in loose formation, so I can live with that.

Still, this is all supposition and procrastination, and I am sure things will sort themselves out when I actually get down to fighting a test battle. I will provide an after action report as soon as I am able.
Posted by Little Odo at 22:04 4 comments: