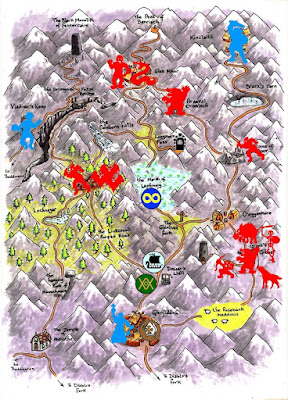 After hearing the news of the battle at Dewar's Well, Rollo downed his flagon of mead in one gulp, let out a mighty belch, wiped his mouth on the back of his hand and strode out into the morning sunlight declaring, "I am off to join the friar on his mission of death-dealing as he seems to be the only man in Glenfiddich capable of putting up a decent fight and thus worthy of my company".
“I for one agree with the barbarian!” declared Xox the Ranger taking up his bow and following Rollo through the still gaping tavern door.

Before Strongbow and the Blue Nun had looked away the rotund silhouette of Bash the Cleric filled the doorway. The bar then filled with his stentorian voice, “Greetings friends!”
“Where did you come from?” asked the Nun, “a couple of heroes just went north in search of you!”
“I was with traders,” he replied taking a seat at the table, “turning wolf-pelts and trinkets into currency!” He placed three gold coins on the table. “So, Strongbow,” Bash smiled, “are you and your weapon for hire?”
“As sure as is my aim master!” he beamed and the deal was struck.
Posted by Little Odo at 19:30