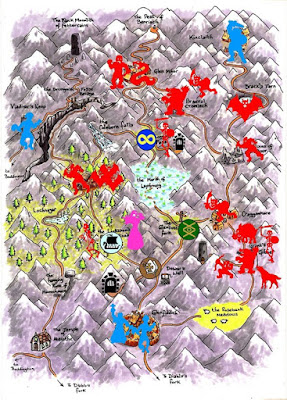 After spending what seemed an eternity waiting for Xox the Ranger to catch him up to see why he was being followed, Rollo the Barbarian slaked his thirst at Dewar's Well before striding on to the Linkwood Forest Road.

Rollo the Barbarian had not gone far along the Linkwood Forest Road, when up ahead, in the dappled, golden light of sunset, he saw a young woman. His eyes widened with unabashed appreciation of her lissome form as the slanting rays shone through her muslin dress. She stopped, terrified.
“Fear not, pretty maid!” Rollo held out his open palms to reassure her, “I am no footpad or forest thief, but a brave blade in the service of the Laird. I am pledged to bring order and to protect the peoples of his fief!”
Her eyes still wide with terror, An Cnoc the maiden staggered backwards. Too fearful to speak, she merely pointed.
Rollo looked down at himself and saw nothing that had ever inspired such terror. What was it about him that terrified her so?
An Cnoc pointed again, this time frantically stabbing the air.
Finally, concluding he could not be the cause of such unfettered horror, Rollo followed the line of her finger and turned. He gasped, for there in the deepening darkness, following in his very footsteps, shambling and staggering disjointedly behind him was the animated bare bones of a long decayed cadaver. Fleshless fingers clawed the cold, black air. Its jaw fell and in a voice torn from beyond the grave, the skeleton screamed, demanding their very souls.

“So this is Dewar’s Well, at last?” Strongbow, sighed and placed his pack on the floor and looked up to the darkening sky.
“Just a resting-point in our journey, young man,” replied Bash the Cleric, “take a seat, you deserve it.”
Strongbow rested against the wall of the well. There was a crack and he nearly fell as a stone gave way beneath his hand, falling to the ground.
“Are you hurt?” asked the cleric.
“No, only startled.” Strongbow bent down and picked up the stone. He stopped, and began brushing the decayed mortar from the underside of the stone. “Look, there are strange marks on it!” he held the stone out for Bash to see.
“That,” observed the cleric, “is known as writing,” he paused. “Let me have a closer look, it appears to be a quite ancient script!”
Muttering a few words, Bash’s sacred talisman glowed, and by its holy light, he slowly traced the letters with his finger. “It is ancient,” he confirmed, “but it is legible to one as learned as I. It tells of a passage built half way down the wall of this very well. This corridor leads to chamber that houses a shrine mounting the famous ‘Pearl of Wisdom’!”
“Can it be true?” gasped Strongbow.
“Do we have,’ asked Bash, “any reason to doubt?”

Secundus the Mage felt uneasy. Darkness had crept upon him quite suddenly. The crags towering over Longmorn pass crowded the sky, blotting out its feeble light. Staff in hand, he kept walking. Perhaps he would arrive at somewhere less unnerving by midnight. Then he stopped. All around him small stones and pebbles clattered down the endarkened screes. The clamour grew as one skeleton warrior after another pulled itself from its forgotten grave, to stand bold and erect, silent in the cold night air. Then, one by one, with long-rusted blades they began beating their mouldering shields. Thud! Thud! Thud! Each beat louder than the last as yet another dead warrior joined the dire, dreaded rhythm of the decayed.
Posted by Little Odo at 19:35