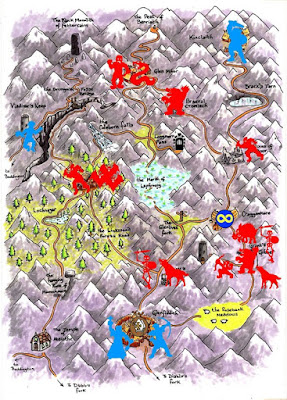 Onan the Barbarian, Strepos the Ranger and Kenny the Fighter were speechless as the cold, dark hand of doom tightened its unforgiving grip around their naked throats.
The grim horn sounded once more and the wolf-mounted goblins charged screaming, loosing dark arrows as they came. Strepos drew his sword as the skeletons ran mindlessly towards him. The fist arrow slammed into his chest. He gasped bloodily as his body numbed and his sword fell from his nerveless hand. He staggered like a rag doll, barely aware as the rust blunted blades tore into his flesh again and again, until at last he fell lifeless to the cold, damp ground.
“Frigg!” ejaculated Onan as the wild wolves bore down, their jaws wide and slavering. Falling before the leader, he grimly jammed his axe-shaft between its gnashing teeth, holding firm as the wolf struggled to rip it from his hands. The goblin wolf-rider, grinning, leaned forward over the wolf’s grey head and sent a single black shaft slamming cruelly down into the warrior’s muscle-chorded throat. Onan’s head fell back as his life-blood, thick and black in the moonlight, gushed like a torrent from the savage wound. His grip failed and the wolf tore hungrily into his dead remains.
Past him and onward the other wolves charged. Kenny thrust his pitchfork before him and gritted his teeth, but his courage and lust for vengeance stood for naught as an unstoppable wave of slavering fury ripped him from his feet and bore him on to a pitiless death.

Second sight was upon Secundus the Mage who suddenly sat bolt-upright in his straw bed, “Oh no!” he gasped, “They’ve killed Kenny!”

As bloody red sun rose above the dark mountains the news from Grant’s Gibbet reached Glen Fiddich.
The Blue Nun wept.
“Ruddy hilarious Motley!” announced the Laird, “Ruddy hilarious! You are a comic genius! What do you have for us next?”
Beyond the walls of Glen Fiddich a new age of chaos reigned.