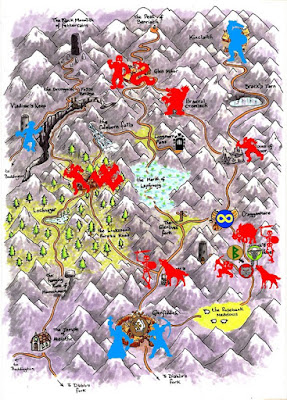 With every strand of his soul screaming for vengeance, Kenny the fighter left the unwelcoming villagers of Cragganmore behind and strode, teeth clenched, towards Grant’s Gibbet. With his heart crying for retribution he failed to notice that Secundus the Mage was not with him.

“Hello big boy,” gushed a fur-coated Cragganmore wench, “is that a magic staff in your hands or are you just pleased to see me?”

“Look!” Onan the Barbarian pointed to a lone figure approaching along the Gragganmore road.
“A sturdy looking fellow,” observed Strepos the ranger, ”and by the way he is carrying that pitch-fork he appears intent on doing someone some mischief!”
Onan spat.
“Hail warriors of Neame!” shouted the stranger.
“Hail to you also!” replied Strepos, “but be kind to tell me who hails us, for we are hard at work killing monsters this day!”
“I am Kenny the fighter, brother of Esme the mage, cruelly slain on this very field. I come to reap vengeance upon Black Tusk the boar!”
“Well met then young man, for in your task you are not alone!”
The three bravoes shook hands by their own customs and together began scouring the heather for the foul boar. Slowly the shadows began to lengthen.
Suddenly like a dark, screeching cloud, the blood bats rose, swirling like smoke before plunging down like a striking snake enveloping the three adventurers in a swarm of spite. Swiftly the men tore forth their weapons, stabbing and slicing, carving crimson swathes in the fluttering darkness as all around them the stricken bats fell like autumn leaves. Yet onwards they came, oblivious to the steel doom that awaited them, swarming, screeching, until finally the air cleared and splattered with feral gore Onan, Strepos and Kenny surveyed their twitching crimson harvest littering the heather all around them. They had triumphed, but where was Black Tusk?

As the angry sun set behind the twisted mountain peaks the chill air cracked, split by the torturing scream of a hunting horn, it’s tone was inhuman, like nothing the three had ever heard. Involuntarily they drew together.
Then a bestial cheer, a war-cry, echoed through the deepening blackness, joined by the howling of wild wolves as over the rise came riding a blood-crazed band of goblin archers, each astride a ravenous wolf, each with a straining bow raised, poised to fill the night air with venomous shafts.
Then as the full moon peeked through the eastern pass and struck the gibbet with frigid light, a cruel laugh, loaded with vitriol, pierced the darkness and the gibbet cage began to rattle and sway as the moldering bones of its eternal captive began to stir, its skull aglow with spectral flames of sapphire. All around the thin earth began to wrack and rupture as sword-bearing fists of bone punched through the thin mountain clay and tumbled the loose stones of forgotten cairns from beneath as Grant’s slain warriors answered his call to rise.
It was only then that the adventurers saw, swathed in moonlight, the dark tower to the west, the same tower whose image scarred the goblins’ savage shields. It was clear the goblins had waited and now at the bidding of their unseen overlord, under the foul reign of night, they had sprung their trap.

“Thank all that is Holy that you are safe!” gasped the Blue Nun as Bash the cleric closed the door of the inn behind him, shutting out the darkness.
“I hear,” continued the nun, “that Kahlua’s dread cavalry are about this night!” She turned to Strongbow the archer, who nodded his agreement.
“But that is not all,” pitched in the bowman, “for I hear a shepherd’s boy stumbled upon a strange, concealed door in the hillside near Longmorn Pass.
Bash’s brow knotted.
“And from the reports and by own studies”, the nun added before pausing, blushing modestly, “I believe that behind that door is the very crypt where was laid the very Shadowsphere!” “My, my!” exclaimed Bash heaving his baggage off his back and on to the table, “but before I consider an expedition, I need to find a worthy fell monger who will convert these heavy wolf-pelts to ready gold!”
Posted by Little Odo at 20:50