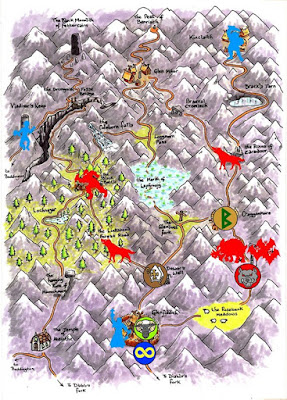 Strepos the ranger looked bewildered, he then violently shook his head.
“What misleading trail had I been following? Who had led me astray? Well, once I have gone to the aid of the mighty Onan, someone will pay! Onwards to Grants Gibbet!”

Finally the blood bats scattered and at last Onan the barbarian could see the bloody ruin that was once Esme the mage. His eyes narrowed.
“As those of my companions who were reliable are now dead, I shall move on to Cragganmore!”

Wasting no time, Strepos the ranger rushed towards Grant’s Gibbet. As the sun reached its zenith the grisly site came into view. Instantly he saw the slaughtered corpses of Sincha and Esme, but Onan was nowhere to be seen. Then, sensing his presence, smelling his sweat, the screeching bats rose like a black and angry cloud. Swiftly, Strepos loosed two arrows into their midst. The cloud swirled, but no bats fell. Yet rattled, they came no closer. Suddenly, from the corner of his eye he saw a low mass tearing through the heather. Without turning he knew it was the boar, bloody-snouted, charging and giving him no time to nock an arrow. In an instant he drew his sword and with a quick twist of the wrist he brought the shimmering blade down towards the rushing boar’s lowered head, but the pig was upon him. Steel sword clashed against ivory tusks and tossed by the impact both man and boar rolled apart into the deep bracken. Strepos sprang to his feet. Crouching he listened. The boar was circling, crashing through the undergrowth. Strepos knew the fight was far from over.

“I see you!” Jim Bean staggered to his feet and stabbed the air with his stubby finger. “Scurry back to ya stinking holes ya rats or I’ll roast and eat ya like would ma grandpappy Sawney!”
The doors slammed shut as terrified, the villagers of Cragganmore fled once more to the shelter of their homes.
Jim Bean spat on the ground and tugged his belt more firmly into place. Then he saw him. On the road to the south, moving with the speed and grace of a mountain cat. Bare-chested and tousle haired came Onan the barbarian. Bean swore and spat once more, pulled his coarse cudgel from his pack and turned to meet his challenger. In a single, smooth motion, Onan drew his axe and raising it high brought its broad blade crashing down on Bean’s befuddled head. The bellicose brawler fell to the dirt. Onan grunted and planting one foot on the slain man’s chest, and with a sickening crack, he wrenched the bloody, brain-smeared axe free from Jim Bean’s cloven skull.
Snorting, Onan searched the body and smiled gleefully on finding three gold pieces. Cautiously the villagers stepped out into the street and hoping this was indeed a deliverer, timidly cheered.


“Forgive my intrusion…”
Kenny the farmer’s son looked up from his tankard to see who had spoken. In the dim light of the Glenfiddich Inn he saw that it was not one of the usual regulars who had spoken but a stranger dressed in a long blue robe studded with arcane symbols. Kenny, above all others at the beer-bench knew him to be a mage.
As Kenny made no objection the stranger continued.
“You look to me as if you plan a journey.”
Kenny nodded.
“Yet I have heard that only the brave or foolhardy venture beyond the palisade walls as have you not heard, there is evil upon this land?”
“Aye!” replied Kenny, “I too would be safe behind a barred and bolted door had I not vowed to spill the blood of all things foul and mal-aligned to avenge the cruel death of my poor sister Esmeralda Dalgleish!”
“A mage?”
“None other.”
“I too,” said the stranger, “feel for her loss, for I am also a mage and all mages feel the absence from the world of one who knows our art. May I introduce myself? I am Secundus the Trivial, mage of Hecate.
“I hope,” interrupted the Blue Nun, “you two are not waiting for Bash the Cleric. He left ages ago.”