I managed to finish the Roman NCOs I was talking about a few weeks ago. Below is the Optio, second in command of a century. I took a centurion's head, resculpted the crest and turned it through 90 degrees, added a scarf (to stop his armour from chaffing) and sculpted his hastile from green stuff - my first ever foray into converting figures. I know these were very simple things to do, but hopefully I will improve and try more intricate stuff from now on. The hastile is a little exaggerated but will be easy to spot on the table-top which, for me, is important. 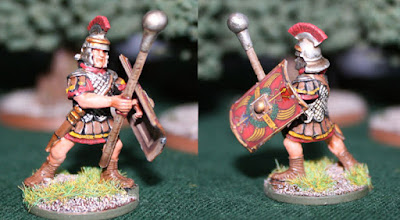 This is a shot of the optio and the tesserarius. Unfortunately the quality of the photo made the poor transfer application stand out. It doesn't notice very much when seen on the table-top but this close-up shows up all the small blemishes - a bit like HD TV I suppose? 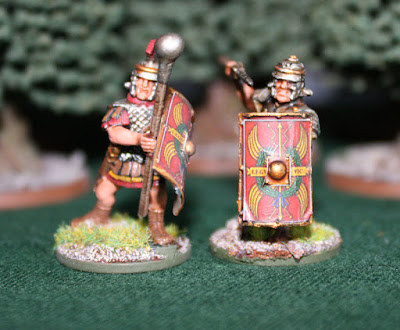 I am almost finished the rest of the century, so when done I will get a few pictures of the whole lot on the wargames table. I also made a good start on the Roman cavalry this week.
Posted by Little Odo at 11:56