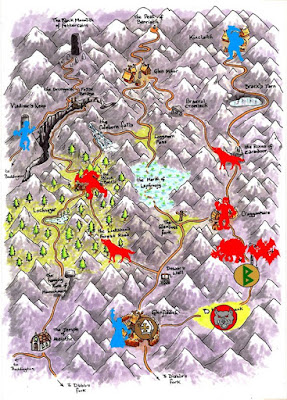 As the rising sun cast its warming rays across the meadow, Esme the mage shook her head, “I was always led to believe that the cleric drew the maps but as Bash has deigned not to join us, we must press on without him!”
Her companions smiled and silently shrugged.
Then she began to dance, the ribbons trailing from her wand tracing graceful arcs through the fresh, morning air.
“Hail fellow travellers at the Rosebank field”’ she sang,
“Within our hands our weapons wield
Let's up and fight the boars and bats
Or shall we turn and run like rats?”

Onan the Barbarian, his eyes wide and his spirit moved, beat his meaty fists against his mighty chest and taking up his axe thrust it towards the north and to Grant’s Gibbet beyond, “Forward by Frygg!” he cried. Sincha No Ha the thief and Strepos the Ranger nodded and raced off into the hills as Esme and Onan broke camp and headed north.

Moments later Strepos reappeared in the meadows. Had he lost his way or had something more sinister occurred?

Meanwhile Bash the Cleric was still discussing theology with the Blue Nunn in the inn at Glenfiddich. His head was clear for water was all he could afford.

Sincha No Ha crouched behind a rock. Ahead upon the creaking gibbet the blood bats hung sleeping, but there was no sign of the wild boar. He had heard that through the boar’s nose was a golden ring, a ring that for gain and kudos, he intended to steal. Slowly he crept forward. Suddenly a snort broke the silence. Instinctively Sincha leapt. The boar, eyes blazing, thundered across the very ground the thief had swiftly abandoned. Sincha landed and rolled, springing to his feet, his tanto dagger drawn, but the boar was gone, its charge spent. Sincha’s eyes flashed to the gibbet. The caged skeleton hung naked in the wind. The hairs stood up sharply on the back of his neck and then the bats were upon him smothering him like a black and screeching blanket, their gelid wings flapping and their fangs biting deep. Pain seared through body as they drank, draining his strength. He thrashed wildly and with each moment more weakly until at last he fell silent and the bats gorged.
On the road ahead, beneath the gibbet, Esme and Onan saw a trembling black mass. At first they were puzzled, but their bile rose as they realised it was a swarm of blood bats feeding on a human victim. Then the wild boar stepped from behind a rock and began drumming the hard ground. The black mass rose. Onan’s muscles rippled as he drew his axe and dagger and Esme’s lips quivered as she began muttering arcane words of power. Lightning licked from her extended wand bathing her in lurid light. The air sizzled and cracked as its livid fire shot forward scorching the thin mountain earth, but her aim was unsure, and unharmed the boar charged. Onan rushed forward but plunged into a dark, churning maelstrom of shrieking blood bats. His blades carved a swirling swathe of shimmering steel through their twisting swarm, striking none but forcing them back beyond his deadly reach, but he was unable to press forward as they dived in once more behind him forcing him to turn and defend his back. Onward the boar charged. Wide-eyed Esme firmly thrust her wand before her only to see it shatter against the unyielding skull of the boar before it smashed, tusks tearing, into her unprotected belly. Her wind burst from her open mouth, loud and bloody and she crashed to the ground, the boar ripping deeper into her struggling flesh until her thrashing and screaming ceased.
Oh well, one turn in and I have already lost my character. Esme bit the dust, but also so did Sincha No Ha. Poor planning and misunderstandings led to our downfall. Back to the drawing board ready for next turn with a new character - better luck next time eh?
Posted by Little Odo at 18:03