Another busy week on the figures front this week. I managed to finish another troll for my fantasy RPG game. She is an old Citadel Troll Wife. I have named her Mara after the female troll character (if my memory serves me correctly) in the Weirdstone of Brisingamen - a children's book by Alan Garner. 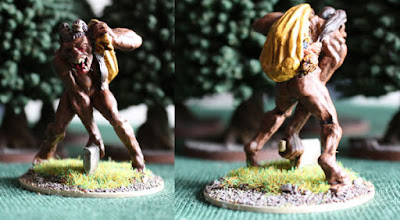 It was a lovely figure to paint - in other words very easy for my painting style.

Also, this week, I managed to almost complete 10 Roman cavalry (hopefully I'll get them up on the blog next week), and half-a-dozen more Bugman's Dwarf Rangers for HotT. I also dug out some early (1985 I think) slotta-based figures. I will be basing them on LotR style bases for skirmishing and RPG. I think they are GW Empire crossbowmen, GW Fighters and some TSR female fighters (the same character in three poses throughout an imaginary career).

Alex started on some Bretonnian archers; he'll probably have those finished by next week so I'll post them up when he has completed them.

At the moment there isn't really any use for any of these figures I am painting. However, I am aiming to amass enough painted minis to create a couple of armies for WAB and HotT to play with in the coming months. The old Citadel minis will be used for a future fantasy RPG, but I think they are just nice to paint for the sake of it (and the fact I have a large lead mountain that needs reducing). I think the blog will be a painting catalogue for the next few months but then, when armies are completed, they will be played with and battle reports written up where possible. Tavern Knights of Legend will also be reported on each week as a central repository for returns that can be accessed by players from anywhere where they have access to an internet connection.
Posted by Little Odo at 20:04