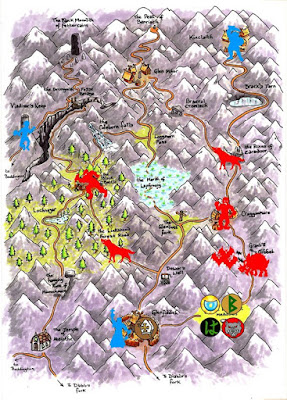 After the cheers had died down, the five tavern knights were left alone in the flickering torchlight.
“Well,” asked Bash the cleric, “does anyone have a plan or is each of us to venture out alone?”
His words were met with silence as each of the five bravoes eyed each other with guarded suspicion.
Sincha No Ha’s unfamiliar accent broke the silence. “Well since no-one else appears to have anything to say, I suggest we all go to the Rosebank Meadows immediately - the darkness holds no terrors for such a band of heroes!”
“Well said by Frygg” broke in Onan the Barbarian, “we must set off bonded as one as if by blood, but Rosebank Meadows sounds unlike a battlefield fit to honour my ancestors! Shall we not head for Dewar’s Well?”
“We could’” replied Sincha No Ha, “but is it not the shortest route to Grant’s Gibbet and the chance to face some real opposition and to lunch on roast boar. Roast wolf does not hold the same appeal to my taste buds”.
It was then agreed, they would venture forth together to Rosebank Meadows as one band of heroes.

The gates of Glenfiddich creaked shut and the heavy bar slammed into place. Esme the mage, Onan the Barbarian, Sincha No Ha the thief and Strepos the ranger looked out beyond the meager circle of torchlight into the blackness beyond. The rain had eased. The night still shuddered with the crash of distant thunder and the black road ahead held only the dread of the unseen.
Strepos, his face hidden in the shadow of his hood was the first to speak. “Both I and Sincha No Ha will better serve scouting and protecting the party’s flanks and rear.” He looked about. “No doubt foul creatures lurk with malevolent intent in that darkness, it will be better that we take the fight to them than wait for them to strike.” Following sagely nods of approval, both he and Sincha No Ha slipped away into the inky blackness.
Onan and Esme stood alone.
“So where’s Bash?” asked Esme.
Onan shrugged, “Frygg knows!”
With that, they began their muddy trek through the night.

Their passage was slow and laborious. Their only comfort was that the storm was showing no will to return. From time to time Sincha No Ha or Strepos would emerge from the blackness with little or nothing to report before plunging back into the unwelcoming night. By the time, muddy and tired, they arrived at the meadows, the sky above the eastern peaks was beginning to gently peach with the coming of the dawn. The dampness of the lush grass was the only sign that a storm had passed in the night. Sheep gamboled gaily in the half-light and once Sincha No Ha and Strepos had confirmed that nothing untoward had awaited their arrival, the four made camp and began discussing their next move.