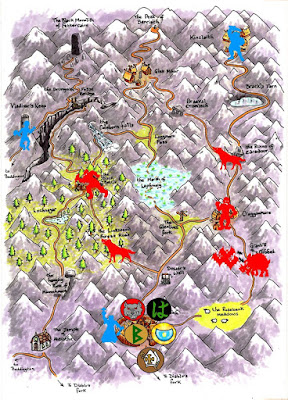 “My Laird”
The Dram of Glenfiddich raised his head and saw before him, standing between two guards, five rain-soaked bravoes. “So,” he asked, “are these the brave knights of the tavern that I have heard so much about?”
“There was another,” declared a guard, “but she wouldn’t come with us unless we paid her, but we’re used to that.”
The Laird sighed and began to wonder whether Motley was a true comic genius after all. He looked to his sons and realised that no matter how ill suited, ill equipped and in so many ways unworthy to fulfil the role of Neame’s legendary knights, these five bedraggled, ale-sops were the fief’s only hope against the forces of darkness that gathered beyond the heavy, barred gates of Glenfiddich.
As thunder rolled above the great hall he beckoned forth two lowly crofters, who turning their tightly clutched tam-o’-shanters nervously in their hands, shuffled forward.
“Tell these heroes” commanded the Laird, “what you told my guards!”
After the further encouragement granted by the sharp point of a guard’s gisarme, the crofters began their tale. They told of packs of wild wolves roaming the ruins of Edradour and the Linkwood Forest, preying on unwary travellers. They told of swarms of blood-bats and a malevolent wild boar whose hunger for human gore made the northern path impassable beyond Grant’s gibbet. Yet most worrying of all they told how villagers of Cragganmore cowered in their cottages, too afraid to venture out to care for their crops and flocks for fear they would attract the bellicose attentions of Jim Bean the wife-beater and drunken brawler and with eyes wide with terror, they told of a cruel cut-throat going by the soubriquet “Cobra “ who had taken a room at the Black Bottle Inn and leaving his slate unpaid terrorises all those who seek shelter beneath the roof, forcing merchants and tinkers to stay at home rather than face his wrath. Then with fear still clear in their unshaved faces, they paused for breath and bowed low before their Laird and master.
The Dram of Glenfiddich turned to the five tavern knights, “It’s close to midnight,” he declared, “something evil’s lurking in the dark, I place my trust in you five heroes to venture forth and save this world for all our children. Our fate is now in your hands, prove my faith worthy or let me hear that you have died trying!”
The five tavern knights looked to each other. Should they venture out into the stormy darkness, or should they return to the taproom and await the clear sky of dawn?