Here's the auxiliary cavalry command. I wasn't sure what to put on the vexillation banner, so left it blank until such time as I think of something. 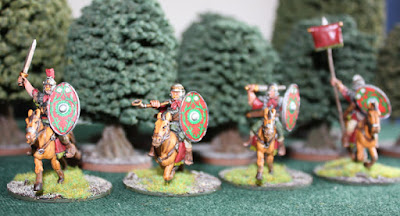 Here's a shot of the whole cavalry contingent riding into the distance, taking the fight to the barbarians in the forested lands of the north.

I will be using these for a Lord of the Rings: Strategy Battle Game campaign. They are mounted on circular bases that suit skirmish games rather than massed rank games like Warhammer Ancient Battles. The legionaries have also been mounted on circular bases in keeping with the theme. I have a couple of units of auxiliaries and archers to join the legionaries, alongside a few units of artillery. Once these have been completed, I will create a large generic Celtic army to face them. I will try to get a picture of the now finished legionary century up on the blog soon too. I just need to get them out of the drawer they are in and aligned on a suitably sized table.
Posted by Little Odo at 17:02