The final set of non-LotR miniatures I have assembled over the last few days is my pack of Rackham's Confrontation Wolfen. Over the years, at trade shows, I have been lucky enough to pick these up very cheaply in deals. Ordinarily these would have cost a fortune, but my collection came in at maybe a third their retail price. All of them are the metal versions before Rackham made the bad mistake of moving to some kind of bendy plastic that nobody liked and therefore did not buy.

First up are a couple of Wolfen Warriors and a Wolfen Repentant of some kind that I have not been able to find in their catalogues. I had previously undercoated these figures but there were many spots I missed, so I re-sprayed them for better coverage. 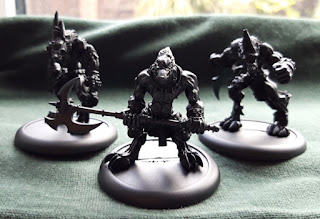 Next up are a couple of Wolfen Hunters and a Wolfen Vestal. Again, these were partially undercoated, so I tried to complete the coverage with the spray can. 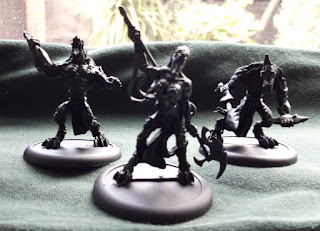 Two more Wolfen Hunters and a Wolfen with a pretty powerful looking crossbow. I imagine the stats for that crossbow will be the same as a ground mounted human ballista judging by the size of it. The two Hunters were partially undercoated, so just needed a touch up, but the crossbow armed warrior had yet to see a lick of paint and needed a bit of prep work done. Unfortunately, it was at this point my spraycan gave up the ghost and ran out on me. I will have to grab a new one when I can to complete these miniatures and the ones in the following photos. 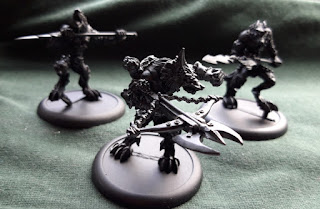 Next up are a few elite/hero types: In the background are Onyx the Prowler and another Repentant type, whilst in the foreground is a Wolfen Predator with Great Blade.These all required a quick clean up and then sticking onto their new 50mm round lipped bases. 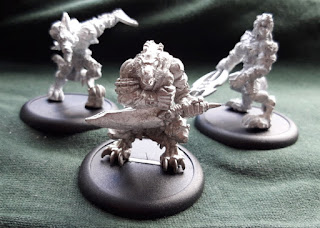 Finally, a couple of leader/hero types: Varghar and Ophyr the Guardian.Again, these just needed a bit of prep before sticking onto their 50mm round bases. 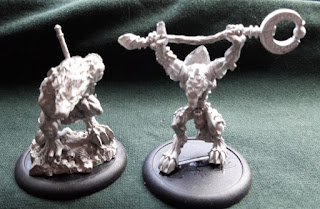 As can be seen from the photographs, I mounted all of the figures on 50mm round lipped bases as they are too big to fit on any others I have in my bits box. This works well for some rules I want to try working on regards knock-downs when combatants win/lose a fight.

These are some of my favourite ever miniatures. I really like the dynamism created with each of these figures - each one looks like they are in the middle of actually doing something rather than being upright and marionette-like. It was such a shame when Rackham went the way of the dodo as they had so many fantastic miniatures factions, great artwork to inspire, and a fully rendered background for the world in which their peoples moved.

If I am able to track down any more of these on the cheap, I will certainly pick them up. It seems (even from the small collection I have) that there are more out there than the catalogues I have viewed suggest.


I may not have a full update for the next few days as I am out of the spray paint I use for undercoating miniatures. I always tend to use Games Workshop's Chaos Black (for most figures) and Rhinox Hide (for rangers, scouts, orcs, horses and other figures that will consist of a mostly brown paintjob) to undercoat as both colours are tried and trusted for me. I have tried other manufacturers' paints but they are either too thick (too much pigment that tends to clog detail) or don't cover as well as I like them to. I know GW stuff is expensive but I am going to stick with what I know on this.

Anyway, I am hoping to gather up the pennies in the next few days and get down to my local GW store to buy another couple of cans. I can't do this tomorrow as my car is in for a service all day and Thursday I need to wait in for a delivery; I hope the delivery company gives me one of those "windows" so I can plan the rest of my day around it and get to my local GW (a good 5 mile/30 minute drive away - its a very busy road between the village where I currently live and the local town).