Time flies...Free Comic Book Day is here again, and this year it coincides with Star Wars Day. The cosplayers were out in force (pardon the pun) and the day had the makings of a great one, despite the inclement weather. 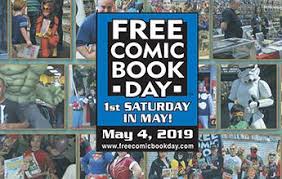 I tried to do my usual this year but with a couple of minor changes due to littlun wanting to come and do some drawing. Usually I head to Orbital first to grab a hand-picked selection of comics, followed by GOSH and then Forbidden Planet as they usually have some kind of 2000AD related signing event.

This year though, the first port of call was GOSH for the kids' comic drawing event. There were three or four professional comics artists and writers on hand to guide the youngsters through creating their own five or six frame story. All the kids seemed to have great fun and the artsists were great as they let the children's imaginations run riot but guided them on how to present their ideas on the page. It was a good 45 minutes session for my son. Unfortunately to get some free comics we had to return outside to the queue with the rest of the fans. Time was getting on by now and I was worried that we would miss out on some of my first choices; I was right, I was only able to pick up two from my list of sixteen here at GOSH, but at least my son got all the kids' choices for himself and his sisters, so all was not lost. 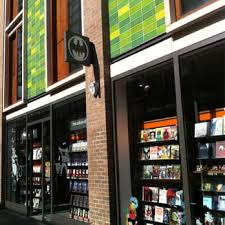 We then moved onto Forbidden Planet for the 2000AD Villains' Special signing. There were four artists and writers at the store, which made the visit worthwhile but, again, a long queue led to me not being able to get any free comics. However, I did pick up three copies of the special edition comic (which were paid for, so not part of the Free Comic Book Day selections - see rant below) and got two of them signed - one of them personally addressed to my son, which made his day; meeting and greeting the people (Greg Staples, Robo Keef, Pye and Matt Smith) involved with creating a comic and geting them to sign a special edition for him. 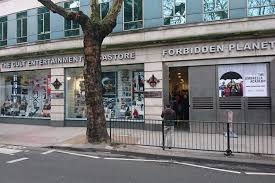 The final port of call was Orbital but, alas, all of their free comics were gone by the time we got there too. This is the first year I have been and not got the majority of what I wanted to try. However, I did ask the comic assistant at Orbital why all the comics were gone whereas over the last few years there were still plenty left at around the same time and he mentioned that deliveries were down this year, but seemingly demand was up - the perfect storm to stop many fans getting what they required. 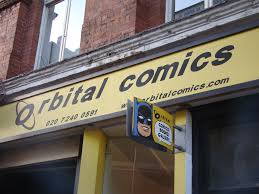 This now brings me back to a scene outside of GOSH between the drawing session and free comic collection. Whilst in the queue one of the comics assistants kept coming down the queue with a list of comics available - every 20 minutes or so, three or four more were crossed off the available list. This ordinarily would not have annoyed me too much as I was there a little later than normal, but two young lads in the queue in front of us happened to have three or four Forbidden Planet bags in their holdalls full of free comics, and they were talking of going back there for more after they had finished at GOSH. Now, I can understand wanting to try to collect all the ones you want to read and maybe a couple of extras from your unsure list, but both of them had in excess of 50 comics each and still wanted more! The cynic in me thought they were doing it to flog them at a profit on eBay. I just hope they will dish the extras out to their friends to share the love of comics and maybe get a few more people involved in the niche but growing comics scene.