Glorfindel and the Witch King

I was away for the weekend (Friday thro' Monday), so only just getting back to the gaming stuff. Just a quick update today based on a little bit of work I was able to complete. Whilst working on the non-LotR fantasy miniatures over the last week or so, I came across a couple of blister packs I picked up as freebies at Salute over the years. These were produced by Mithril Miniatures who seem to have some kind of licence for an official range of Lord of the Rings figures based on the books.

I didn't get around to glueing up the orc on warg/giant wolf but I did manage to do something with Glorfindel and the Witch King. I cut them off the integral base things that they were on and pegged them by their feet to the standard 25mm slotta bases I use. You may also have noticed that they have been sprayed in black undercoat. That is because I was able to get out to my local GW store last week and pick up a new can of Chaos Black. Unfortunately, they no longer supply Rhinox Hide which is what I use to undercoat horses, scouts, rangers and so on. 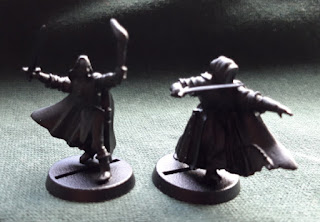 These miniatures are made at a slightly larger scale than the Games Workshop figures, but a quick measure up proved that they would work with the rest of my collection. I only have three other Ringwraiths and two of those are also of the Witch King (plus Khamul, foot and mounted), so when I get around to painting him, I will show a comparison of them side-by-side. I would like to grab a few more generic Ringwraiths, but they will have to wait at the back of a very long queue for now.

Until I get some putty sorted out, my work on these miniatures has ground to a halt for a bit. I think I will photograph each army (whether undercoated/puttied or not) in its entirety and run a few numbers just to get everything catalogued to date. At least I can then begin to work on statting the units/armies to see what I have and in what games systems they can be used.