A quick win today; this session's work consists of a few models I bought from EBob before they were discontinued. He also made a certain ranger with a dog (I think) that took my fancy but it was always out of stock when I tried to order it prior to it also being pulled. 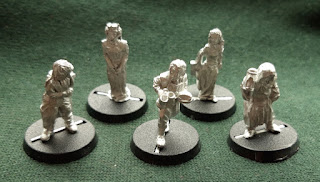 Unfortunately the photo is not too clear (it was taken from my phone in the still dull weather) but in the front row can be seen a not Bill Ferny, Barliman Butterbur and the gate-keeper from the films. In the back row is a kind of queen miniature (not sure who she is supposed to be) and what is now called Lady Greensleeves(?); otherwise known as Galadriel? The back row miniatures were still available last time I looked, but the front three were pulled several years ago.

These will make great additions to any adventures that happen to occur in Bree, or for use in a Scouring of the Shire scenario with a handful of ruffians (need to see if these are still available on GW's site when I get some spare cash, or look for third party companies' offerings to use as proxies) and orcs to fight against some hobbits.

I have been flipping through my Adventures in Middle Earth 5e rule books again recently so my imagination is working overtime on what scenarios I can run as RPGs and then as tabletop battles. Again, like with the Ushabti, and the Fomorians and Wolfen to come, I will need to stat these up for each of the games I intend to play.


These figures have been mounted on the standard GW 25mm sized slotta bases so that they fit in with all of my other LotR miniatures. Whilst looking at my other slotta tabbed fantasy miniatures, that will be featured over the next few days, I decided that I would put them all on round bases according to their size too. So, from my bases collection I sorted out 30mm lipped bases for my Fomorians, 40mm troll bases for my Ushabti, and 50mm lipped bases for the Wolfen. I had to use these sizes so that the minatures would actually fit. As I am not really a big battle game type person, the square bases have been put to one side for other uses in the future; the round bases suit my preferred skirmish style of gaming. That said, I could always get hold of some sabot bases for these miniatures to sit in to create units if required.