Tolkien - the film (some spoilers)

I happened to catch sight of an advert for this film on the side of a bus as I was driving my youngest to his child minder last Tuesday morning. On a whim, I decided to take the littluns to the cinema to see it this afternoon/evening as it was only a 12a certificate and they know I love the books and films. 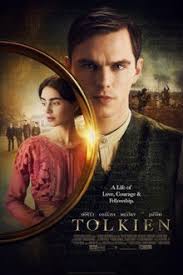 I was not sure what to expect to be honest as the Tolkien estate have not given their consent to it and the only review I have read so far panned it (and the reviewer hadn't even seen the film!); well, more like they panned the writing and directing team due to the nature of their prior works.

I watched it with an open mind in the hope that I might learn something about the life of professor Tolkien. The film mostly concentrated on his childhood, the love he had for his wife, and how he worked his way through school where he met his friends and gained a place at university. The story is mostly told as flashbacks from his time in the trenches.

Of the many things I really liked about the film was the imagery in the background. I am aware that Tolkien once said that none of his stories were allegorical, but the film writers put in many references for those who know his works. It was subtly done in most places and ramped up when required. It worked for me.

The film makers obviously thought a lot about the close friendship he had with three of his school chums; it kept coming back to what they got up to through their formative years, including stealing a bus together, until Tolkien's return from the trenches,

I recommend going to see this film if you are a Tolkien fan. It tugs at the heart strings in places and strengthens sympathies for those poor young men who lost their lives in the Great War. The film ends at the beginning of his popular literary career, with him writing the first line of The Hobbit.

To misquote a line or two from the film; it is a film about friendship... no, fellowship.