Following along the same theme as yesterday's post about the Dunlendings, here are a few more of Saruman's hard-hitting forces - the Fighting Uruk Hai. This is a photo of the force before I completed all of the preparation. Some had been done before I got onto this second round of work, so I will only be showing the ones I have worked on today.

The Dunlendings were completed yesterday; the warg riders have already been prepped; for the orcs see below for a few more details. So, that just leaves the Uruk Hai for this part of the Isengard army.

First up are the Uruk Hai Scouts. I forgot that the box set I had contained 24 of the plastic warriors so that brought a smile to my face as I had more than I thought. The blister contained 3 metal Uruk Hai scouts, so along with a few Uruk Hai heroes (2 poses of Lurtz - with bow and cleaver/shield - and one of Ugluk (I think?)) that brings my total to 30 scouts. 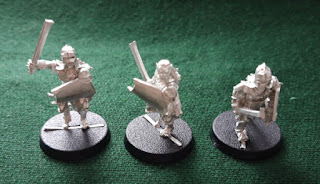 As I had already made up loads of the plastic Uruk Hai warriors, it was now down to me to prep their command. For this small part of the force I found that I had a blister of crossbow armed uruks and a command blister that included a captain and banner bearer. 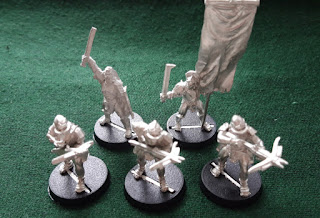 Finally, they needed a charismatic and powerful leader; enter Saruman. I had already prepped Saruman and Grima on foot, so this time it was the turn of Saruman on horseback. I also have a copy of Saruman in his guise as Sharky from when he terrorised the hobbit folk whilst Scouring the Shire. 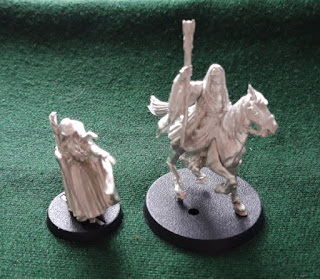 As can be seen from the photos of many of these multi-part metal miniatures there are lots of areas where a spot of green stuff will come in handy to fill a few gaps. This will be done when I get round to the final preparation and undercoating of each faction before painting.


I have lots of orc miniatures that I was going to originally use as part of a Mordor force alongside my Easterlings and Haradrim, but now I think I will concentrate on them just being Isengard lackeys. So, unless any miniatures are obviously meant to depict Mordor troops, all my orcs etc. will be Isengarders. Obviously they can double up as either, so if I decide to create a Mordor force in the future then the orcs and maybe the warg riders can perform in either role as per their whim. This does leave me with the dilemma of banner and shield sigils - the White Hand or "<" of Saruman/Curunir or should it be the Eye of Mordor?


Whilst looking over my largest evil force I noticed that there would be more than enough figures to make up either Dragon Rampant or Saga forces. Again I will have to check the numbers and whether anyone has already made up what I am looking for on the internet. Obviously there will also be enough here to give Rohan a run for its money either as full on SBG army or at the smaller Battle Companies scale.