An Alliance of Men and Elves

Today saw the turn of some odds and ends figures that don't fit into my main Third Age armies - variously referred to as Free Peoples these figures can aid and abet any faction that needs a little rounding out, especially the wizards. There are also some Second Age miniatures - I don't ordinarily play Second Age as the figure availability is a bit limited, but as I have a few minis from those factions I guess I could make up a few warbands and one or two Battle Companies?

With regards using the figures for Third Age games, I guess that the Numenorians, at a push, could be classed as one of the Mannish fiefdoms of Gondor and the Elves are timeless, so no worries there. My eldest son plays elves, so I may very well just pass them all over to him if he has any gaps in his collection.

I will be using the above picture a few times over the next couple of blog entries to show the starting point for each minor faction. As can be seen, there are wizards, hobbits, Numenoreans, elves and a number of one-offs to add a bit of interest to the gaming table.

Anyway, onto the figures I prepped this morning, here are the Numenoreans. I only have the plastic swordsmen (plus Elendil and Isildur in metal already made up), so they will make a small but none-the-less interesting faction to play in smaller skirmish games. 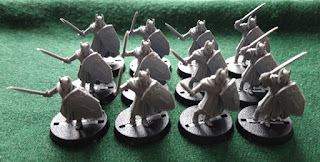 Next is a bunch of Elf Warriors armed with elven blades and bows. These could make for a powerful Battle Company if painted to represent a more modern (i.e. Third Age) depiction of high Elves. 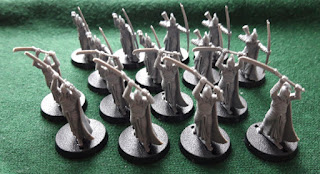 I have 16 of these elves as well as a handful of leaders. Some are purely Second Age like Gil Galad, but Elrond, Glorfindel and Legolas (plus the few others in my collection) could be used in either age. 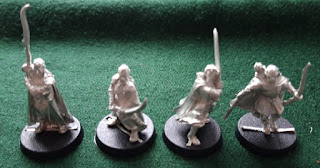 Looking at these minis now, I can't wait to get them undercoated and ready to take a lick of paint. There is still another set or two of miniatures in this "faction" to complete tomorrow and maybe Monday - these are the more one-offs and magical types. Another interesting bunch but I doubt they will be used that much in my gaming.


Over the last week or so I have made great inroads into prepping my Lord of the Rings collection for a long summer of painting (hopefully). I still have many dozens of miniatures to prep, but over the coming week or two these should all get to the same stage as the figures you have seen in the last few blog entries.

I have been putting aside an hour or two each day, whilst I can, to make sure that this work happens. I am feeling more positive about my hobby at the moment - long may that continue. Once all the figures have been prepped, they will be ready for the undercoating, I then just need to wait until I get a few warm, dry and sunny days so I can get out into the garden and get the spray cans out. I reckon it should take a lot less time to do the spraying than it did to do the prepping so, with a bit of luck, the next stage will only take maybe a week rather than the two or three weeks that this stage looks like it will take. That said, some of the multi-part figures may require a bit of green stuff to smooth out some of the joins and holes, so a few miniatures may get left behind until that phase can be completed too - they can be done on those days between spraying if the weather is not kind to me.

Obviously, as I get to each stage I will photograph the results of my work. I will probably go faction by faction again until it comes to the actual painting. I will then most likely do them warband at a time so that I can chop and change what I paint to stop me getting bored, fatigued or burned out trying to paint say 72 Gondorian soldiers that look almost identical all in one go.