This faction seems to have spawned a life of its own. What started as just a single box of 20 Easterling Warriors has burgeoned into quite a force to be reckoned with. EBay was my friend for this faction as almost everything bar the initial purchase was from there.

Here is the original photo from two years ago detailing what I had in my faction at that time...

First up are a bunch of metal Easterling warriors armed with halberds and swords. These round out my inital small force of metal minis that can be used as dismounted versions of Kataphracts or just on their own as is. I may even use them as Black Dragon elites as they look slightly different to the plastic Easterling warriors, but I need to find out more about that particular troop type just in case they are too different to be used (I only know them by name at the moment). I will have to think about paint jobs and so forth to differentiate them, but then again the slightly different look and feel to the plastic miniatures may do that anyway. 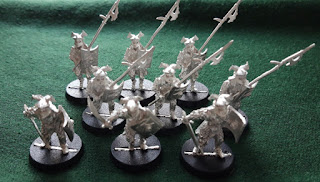 The next bunch are a set of command figures: a captain, a dismounted Dragon Knight, a banner bearer and a warpriest. I managed to get hold of these in metal before they went to Finecast. There are several other elite/command figures that I missed but I am not a great fan of resin miniatures so will most likely not buy them going forward as I have more than enough to be getting on with. The leader of my little legion will be Khamul - the Ringwraith, supported by any one of the captains or, indeed, the Dragon Knight. 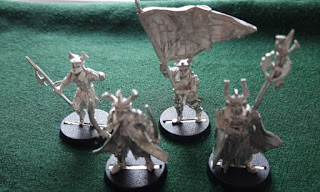 The final part of this army that needed to be prepped was the mounted contingent - plastic and metal kataphracts. I really like these miniatures - they have been firm favourites of mine for a long time. I already have some metal kataphracts prepped and part painted to add them to, and together they make up a couple of decent sized mounted contingents to rub up against my Rohan and Gondor cavalry.

Unfortunately, time ran away with me today and this is as far as I could get with the mounted miniatures. The usual cut off the sprues and filled with Plasticene shot follows... 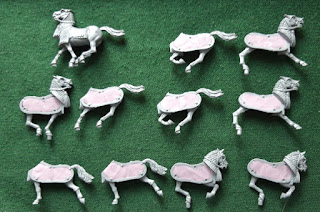 The plastic horses should be finished tomorrow and I should also hopefully get to work on the metal kataphracts. Hopefully I can also get the plastic riders completed too but there are a lot of decisions to be made as to how I want them to look. There is a drummer and a banner bearer as well as heads and a cape to make up a leader.

I will also look and see how the spare parts (there are lots of them) can go towards creating some decent foot conversions - maybe a drummer, banner bearer and captain in plastic? Also, I may look at converting a metal kataphract into a captain bearing a halberd (if that is possible - I need to check the rules). Also a foot captain (I have three of this particular miniature) can be armed with a spare shield as I have a couple of plastic ones in my bits box to be used. As I said, lots to think about so this force may be a little while longer completing than originally envisaged.


Like with my other factions with several sprues worth of foot troops, these will make for a reasonable sized Dragon Rampant and/or Saga force. It is great that I will be able to use so many of my Lord of the Rings miniatures for alternative wargames, as well as the Adventures in Middle Earth role playing game I picked up a few years back.