I spent nearly two hours on these Kataphracts - there was a lot more to them than I anticpated. The plastic horses were almost there and just needed their two halves glueing together and then basing, but the metal ones were extremely fiddly and needed a lot of patience.

As mentioned in the post yesterday, I still have a lot of procrastinating to do on the plastic warriors that will sit upon the plastic mounts. Should I make a command unit out of them and use any spares to try to create some foot versions or do I just go for six mounted warrior types? I think this is where I add another box set to the wanted list. Anyway, with regards the horses, there are three left and right halves to make up quite a few variants. I tried to make mine all different. Here are the completed horses in all their glory...

Next up were the metal Kataphracts - I already have one box set made up and semi-painted but I also had another box set to build as well as a couple of eBay purchases to make the unit up to a round dozen.

As mentioned above, some of these were extremely fiddly to build; some of the front legs are separate and are quite a bother to get to fit in between body and base. Glue went everywhere, fingers got stuck together, but I think I eventually got there with them. I just hope they don't start to fall apart when I get around to painting them. 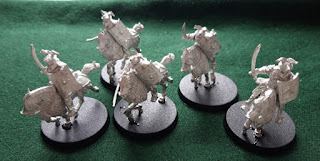 The picture above shows the box set of Kataphracts - you get five metal ones in a box but six plastic ones. They are all nice and shiny and ready for an undercoat. There are a few gaps that will need to be green-stuffed to smooth them out, but I will get around to that when I get to actually work on this faction in earnest.

The next picture shows the two eBay purchases. These took a lot of cleaning as the previous owner had just stuck blobs of greenstuff in to stick the legs on. These were a bit of a mess and I had to remove the legs and then scrape them clean to enable me to start again. Luckily the previous owner did not mix the putty very well so it came off relatively easily. 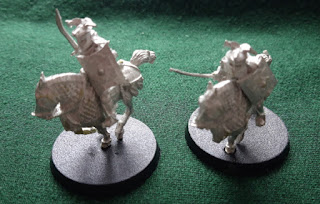 As mentioned in a previous post, I may see how easy it is to convert one or two of these metal figures into command types - I really want a captain armed with a halberd and shield that fights from horseback. I think it would make for a nice conversion even if not legal gaming wise (still haven't checked yet as my rules are boxed up in the garage).

Again, due to numbers, these figures can go a long way towards creating decent sized units for Saga and Dragon Rampant. I am so looking forward to slowly building up these forces in order to maybe first play Battle Companies (rumour has it that there is an updated version due out sometime soon), then move onto some small (500 points?) SBG skirmishes, then perhaps Saga skirmishes and then onto full blown SBG and Dragon Rampant armies.


I think that will be it for the Easterlings for a few days whilst I think my way through what I want to do with the plastic box set riders. When I had finished the modelling for today, I went through what I have left to do in the LotR lead and plastic piles (there are still many, many hundreds of non-LotR minis that need some tlc). I have:
Most of these should get completed by the end of next week, so I hope the weather improves just a little more so that I can get into the garden and begin undercoating them all.