On Friday I managed to grab three hours and put them to good use. I took all of my Haradrim miniatures and began working on them. Some have already been prepped and are ready for their undercoats - details can be seen in the picture below that I took a couple of years ago when I still had high hopes for my Middle Earth armies. 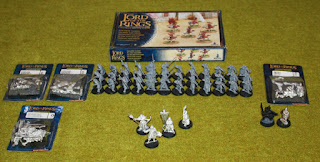 As you can see, I had a box of Haradrim Raiders and four blisters of figures to work on. The next three hours saw me get out the clippers, files and plastic/Super glues and get them made up. You may also notice a couple of random miniatures in the photo (on the right). These are a couple of minis I thought might come in handy for a Haradrim force. The one on the left is an ancient Citadel Chaos type warrior and the one on the right was a freebie from a magazine or something of Saladin.

I only took a few photos as I was working on them; pretty much only the plastic Haradrim raiders as I wanted a mini-tutorial for myself on how I put them together. First up is a sprue shot of the riders and their equipment... 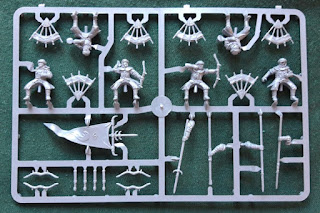 Now for the actual horses... 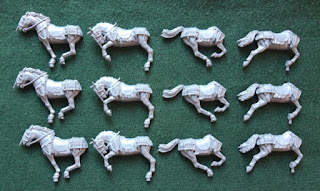 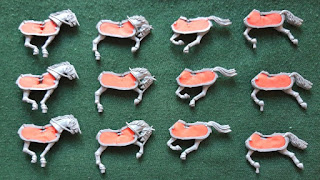 I noticed that there are only two variants for each half of the horse. I put them together for test purposes and noticed the typical goofy kicking out leg pose. I decided I would play it safe and go for two of each of the main pose and then do a swap for the other two so I only ended up with the one goofy pose.

When putting the horses together I decided to do my usual and fill the body cavities with Plasticene. I always do this for cavalry miniatures now as it gives them an extra gramme or two of heft. Not a lot in the scheme of things but it can make a bit of difference on the gaming table as they tend to be just that little tiny bit more stable. 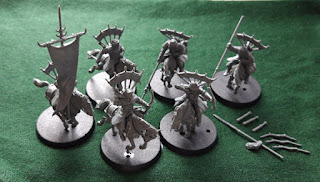 I decided not to do a full army photo as I will save that until I come to paint them, so I can get a before and after shot. Also, I was at a loss as to what to do with the extra bows, quivers and spear arm. For now I have plonked them in my bits box in a separate see through zip-lock bag I had lying around. They may come in handy later on for some conversions.

Now for the procrastination bit. I have decided to be good with this army and only contemplate buying one more box of Haradrim Raiders (when I have the spare money) so I have a round dozen plastic mounted troops. I have plenty of everything else, so unless I am lucky and spot some eBay or trade show bargains of Harad metal miniatures I will leave the force at that.


I have plenty of troops to make a great raiding force; 36 warriors, 8 mounted raiders, a few heroes and a couple of half-trolls. I will have to sit down and work out the points values as I complete the force. I may paint up 2/3 of the foot troops for normal SBG and the other 1/3 as a Battle Companies force, and utilise my two non-GW minis as captains of that force.

As I have quite a few minis in this faction it might also be numerous enough to be used for any future games of Dragon Rampant or Saga I may wish to partake in. When ready, I will trawl the internet to see if anyone has made up any faction specific Dragon Rampant or Saga forces and then calculate a force that can be made up from the miniatures I already have. If I need any further additional miniatures for this particular army at a later date, I can hopefully ask for a box or whatever for Christmas or hopefully have a job by then in order to buy them myself.

Monday will hopefully see me doing the same for another faction. Which faction will I choose? Decisions, decisions :-)