The miniatures I got round to prepping today don't really fit into any other category, so I labelled them the Magic and Mysteries faction of the Free Peoples. Unfortunately I did not have as much time as I usually do to get anywhere near as much work done (and my superglue has now gone a bit claggy and doesn't stick as well so I will need to get a new tube), but progress was still made.

In this selection are one-off figures that I got with the De Agostini Battle Games in Middle Earth magazine that was published between 2002 and 2006 ish. They could make up parts of those other armies that I either just didn't get around to collecting or didn't want to use in my gaming, but to be honest, I will just keep them aside until such a time as I may get to use them. They will be nice as just painting projects to be called upon if I hit any dry patches in my other factions.

In this selection are a number of hobbits, Tom Bombadil, King of the Dead, a few wizards and a Woses leader (Gan-Buri-Gan?). However, due to the aforementioned superglue incident I couldn't finish off any multi-part minatures as the glue just wasn't instantaneously tacky enough to allow arms/weapons etc, to catch straight away, but just enough that it would bind my fingers to whatever I was holding. The glue is fine for basing but nothing else at present.

First up is a gaggle of really obscure miniatures gaming wise. Not sure how I will use these to be honest - King of the Dunharrow Dead and Tom Bombadil. As I don't have any other LotR undead (other than a couple of Ring Wraiths) to make up an army he could double up as a barrow wight maybe? Tom Bombadil can only really be a painting project as the only stats I have seen for him are a bit vague - I will try to paint him as per the description in the books though and see if I can use him in a scenario or two, but without Goldberry I am not sure I'd want to (although perhaps my Lady Galadriel figure could double-up as Goldberry?). 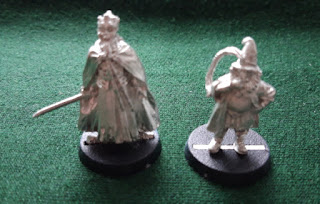 I then got onto a few of the hobbits I have lying around. Farmer Maggot along with Grip, Wolf and fang helping Bilbo keep an appointment. I have some Fellowship set Frodo, Sam, Merry and Pippin miniatures already prepped, so these can go right alongside them. If I recall correctly, GW have re-released the hobbit Shirriffs etc. - if they are in metal, I may pick some up when I get some spare cash to create a little Shireling army to fight against some goblins and wargs etc. and maybe some Dunlanders and various ruffians with Sharky and Worm? 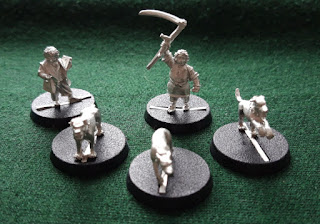 The final picture is of Gandalf the White on Shadowfax. It's funny how I can't get used to Gandalf being the White; I always see him as being the Grey even though he appears in more pages of the trilogy as the White. I think a lot of it may be due to the fact that I prefer the Fellowship journey and small skirmishes more than big set piece battles that tend to occur later in the books. It may also be due to the fact he is the Grey in The Hobbit too? I don't know really - does anyone else out there think the same way as I do? 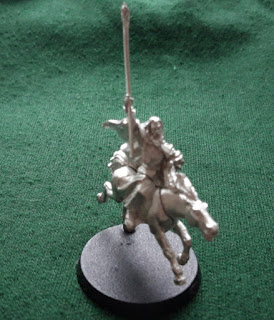 I still have a Gollum and Gan-buri-gan figure to complete and several more wizardly figures to add to the blog, but these will have to wait until I can get to the shops and grab some superglue tomorrow. Hopefully I can get the rest of them completed over the weekend (although I am busy this weekend as it is a friend's 50th birthday and a lot of us are out to celebrate).


Next week I  have one or two smaller factions (Moria) to complete and then I am onto the larger armies of Rhun, Rohan and Gondor (although I think all of Gondor's figures have been prepped). I think my Isengard orcs and wargs are completed too, but I will need to check. Lots more to do but I have made great in-roads so far over the last week or two by chipping away at the lead and plastic mountain for an hour or so here and an hour or so there.