I managed to get my first two Runequest miniatures finished this weekend. They are representative of two characters from a White Dwarf ﻿story from the early years. I personally don't think they look anything like the artwork for the stories but they are OK figures none-the-less. I never really used them for gaming back in the day as they were so big compared to other minis of the time. I have painted them with bronzed armour and weaponry as per the Glorantha setting. I always thought most referees got their setting wrong with Runequest and always seemed to make it a quasi-medieval setting as opposed to a Bronze Age style setting. That said, it never detracted from the wonderful RPG games I had down at the local wargames clubs back in the early 80s and 90s. 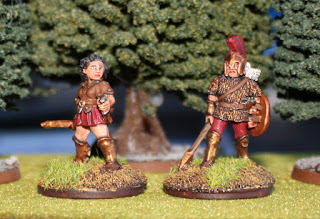 I had a go at painting faces this time, just for a change but I managed to miss Wolfhead's moustache. It can be clearly seen in the photograph when it is viewed at full size, but my unaided eyesight is getting so bad now I missed it completely! Griselda also looks a little wonky-eyed, but from another angle she looks just fine. I have decided on a red theme for cloth with my heroes as their enemies will have a green theme to set them apart; not that there needs to be much in the way of dress sense to set aside Broo!

Here is a picture I nabbed from t'Internet. Copyright whoever, TM whatever. Used for display purposes only. I think it was from an advert in WD 50 if memory serves me rightly (I still have all of my early WDs from around 6 up to 90 when it started to become a house magazine for GW - I passed on a few after that and started to buy again around 300 when LotR SBG came out). Anyway, I bought this set back in the day (see previous thread on what I did with my Saturday job money) but one or two of the minis have gone missing since. I will get round to painting them all eventually.

I actually did quite a bit of painting this weekend but didn't manage to complete any others than those above. I am almost there with the rest of the Broo, another Runequest adventurer and a large section of Eastern Empire Auxiliary archers for my Roman army. I also started on some Dragonewts and a centaur. I am hoping that most of these can be completed next weekend.
Posted by Little Odo at 18:20