I managed to get some spray varnishing done tonight and therefore finished another couple of Runequest miniatures. It was only after I took the photos that I realised I must have dropped/bumped the ﻿female warrior during the last few days as some of the paint has rubbed off of her nose. She was originally painted by my friend Colin, but a lot of the paint had rubbed off or faded, so it was an almost complete repaint but with the same colour scheme. Her sword turned out a better bronze than most of the minis so far, and I like the depth of colour I have achieved in the shield. All of the bronze I have painted on these minis is to the same formula (using GW acrylic paints unless stated): Dwarf Bronze, Newton & Windsor Nut Brown ink, heavy dry brush of Shining Gold and light dry brush of Burnished Gold to finish off. 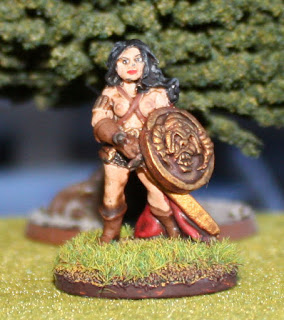 Here is the first Broo warrior that is individually based. He didn't originally have a shield and looked a bit goofy, so I added one from my bits box - a Warlord Games Celt shield. I have painted some iron stuff onto these warriors. I can't remember if Broo are affected by iron, but I decided they wouldn't be in this case and that they had stolen the valuable metal from human adventurers they had killed and eaten (or mated with!). 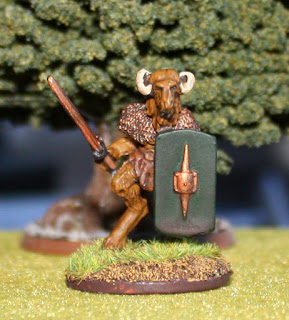 ﻿
Next up should be a stack more Runequest stuff and some Romans; hopefully this weekend coming should see a stack of them on the blog as they are so close to completion.
Posted by Little Odo at 20:58