Here they are at long last - all of my Broo figures have now been completed. I have five from the Citadel Runequest Box Set ﻿on a HotT base to use as a mercenary warband for those that can put up with their filthy habits, and the remaining four are the three in the photo below and the one that was finished last week. 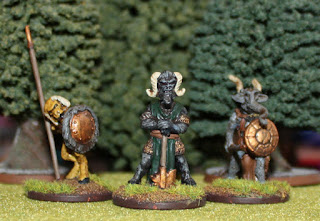 I don't know what manufacturer this one is from. It fits in more with the Glorantha explanation that they are very low-tech and scavenge what weapons they can. This one is armed with a fire-hardened stick. My friend Colin originally painted him, but I have freshened the paint job up a little 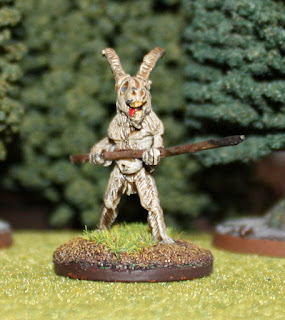 These two are part of the Citadel range of beastmen or something similar before they became part of the official Warhammer Beastmen canon. I prefer these old school figures - they seem to have more character than the more modern ones. 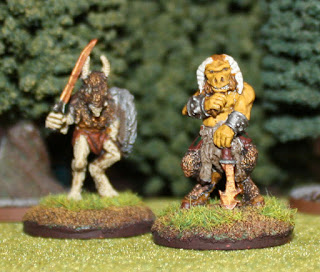 A final shot of the members of the warband I finished today.

Still to come from my Runequest collection are six Dragonewts and a centaur. I still have a couple more Dragonewts that were the original riders of the terror birds I painted a few months back, but I won't be painting them for a while yet, and I doubt I will mount them on the terror birds. Hopefully, the rest of these Runequest minis should be finished in a week or two. I am tempted to put them up against my Brytenwalda Arthurians for a change of pace; I just need to make up some stats for them, and perhaps some simple magic.

My next step for this particular project will be to get a few more warriors to use as adventurers and some more RQ monsters - Can anyone out there recommend a site that sells either these old school ones or any new manufacturers that stock figures in a similar vein?
Posted by Little Odo at 19:30