After saying that I hadn't bought any gaming gear for a while, I went down to my local shopping centre (Blue Water in Kent) yesterday and partook of some retail therapy. I needed to buy some new clothes for work (something I haven't done for about 2-3 years now - I generally do not worry about clothes until they start to get holes in them) and my youngest needed a few items as he is growing so fast. We popped into a few shops and whilst my wife was looking at girly things in a variety of places I decided to take a wander into Games Workshop. I had a couple of vouchers burning a hole in my wallet, so I spent them on some new figures from The Hobbit range and some of the new paint range.

I picked up several of the new paints (I will try them out soon and give my verdict) and a box of the Hunter Orcs on Fell Wargs. 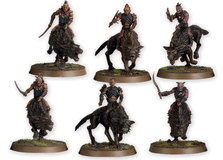 In the box you get:

Each warg comes in 4 parts - 2 body halves and 2 head halves
The orcs (lower body) are part integral to the wargs, have a separate torso, head, and left and right arms. There are several variants of each to make a very diverse force, so it will take several boxes before the same warg rider needs to be built.

The sculpting is very crisp and very fine - the methodology has come on leaps and bounds since the early days of the Riders of Rohan and Warriors of Gondor. GW are doing a great job with these figures IMHO.

My only question for this box set is why GW didn't sculpt the riders separately from the wargs? That said, GW sell separate wargs, so I can only assume they will not contain any orc parts and maybe are different poses to those in this box? Perhaps they sculpted the wargs first, tooled them, and then sculpted the orcs on them and tooled them again? I am interested in finding this out.

I really like these minis - much more so than the original hyena-wargs that went before (but that's not to say I didn't like those minis). My only criticism is the weapons - I am not a fan of crinkle-cut blades, and there are far too many of them in the box for my liking.

Overall, I would give these a 8.5 out of 10. Alex bought the Elven Cavalry recently, and those are well worth a 9.5 - they are fantastic sculpts. Maybe I can get him to paint them soon as he has already glued them up ready for undercoating, so I can give a brief overview of that set too.