Roman citizens are back on the scene with this entry today. I am trying to tidy up and finish off a lot of stragglers at the moment that have stayed on the workbench for a while. These are all from Warlord Games range of Roman Citizens and a spare Celtic crone I had lying around.

First up are a merchant and his bodyguard, Brutus. I actually put a lot of work into the casket but I don't think it really shows. I painted it as an ivory casket with a dark wood surround, lined with a rich red silk and filled with gold and silver trinkets with a centre piece having a great green gem. All ripe for the plucking by the not-Conan I painted yesterday. I am not sure if Brutus would be able to stop the barbarian from pilfering from the merchant or whether he would aid him in the heist and join him for a few weeks of wine, women and song in the local taverns of Zamora. 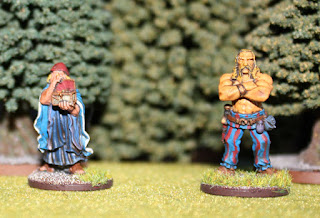 This next couple are a strange pairing. The old crone I have painted before in a different colour scheme, alongside a bunch of Celtic kids. This time she is portrayed alongside a Roman mendicant. The beggar cuts a strange figure in that he sits on a sumptuous cushion, in a white toga, with a gold medallion around his neck, holding out a Samian ware bowl. Yes, he has a stump for one of his legs but I painted him richly to juxtapose his position as a newly made member of the unemployable. It just goes to show how rapidly fortunes could change in Ancient Rome; one minute a well thought of businessman, the next the gutter. 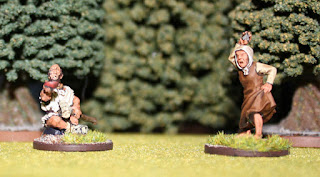 I am hoping to put the finishing touches to the rest of those lesser goblins/svart alfa later on today and do a bit more on a few more of those Brytenwalda troops. I managed to get started on the Splintered Lands figures yesterday too, so they should see light of day in the next week or two as well. Alex has been busy on some more Bretonnians and WH40K stuff.
Posted by Little Odo at 10:01