These are the other seven members of the Tactical Squad that Alex painted. The other three are Black Templars (see previous post) and these are Ultramarines. Alex's force is going to be an Ultramarine force but he is going to include the occasional unit from other chapters to make up the numbers (and because he wants to paint Marines other than those of Ultramar.

Here are the final two from the squad... 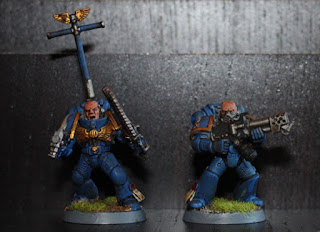 Next up should be his officers and a few other specialist troops.

For his birthday, he got a squad of Vanguard Veterans from me, and he has used some of his birthday money to get himself a Razorback. I daresay these will be painted up in record time.

The Vanguard Veterans are the first of the new Citadel Finecast miniatures that we have bought. We have heard some rumours about how widely differing the finishing on these is (with many miscasts), but it looks like there was only one minor air-blister that put a bit of a dent in a shoulder pad of just one of the marines - easily remedied with a bit of green stuff. The improved quality of the resin does make a difference to the look of the minis, but I am not sure, personally, whether that justifies the extra cost. Still, Alex loves them and that's what matters in the end.
Posted by Little Odo at 21:21