Whilst finishing off the palm trees, see entry below, I managed to complete a handful of fighters. First up is a really early Ral Partha Heavy Fighter. This was actually one of my first ever figures and has been through several repaints, almost always on a red/black theme. I decided to brighten him up a bit with the addition of a green cloak and a bright yellow/red shield. 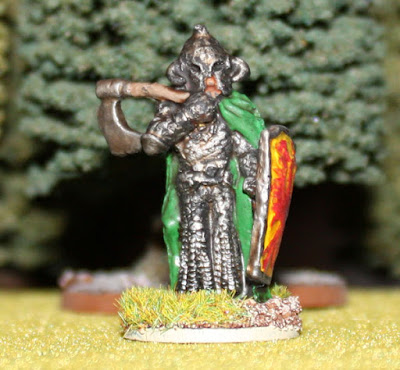 I'm not sure what this mini is. I think it is a Citadel fighter, but I really cannot remember. I have painted him up as a kind of Elf ranger as it is actually a fairly small miniature. 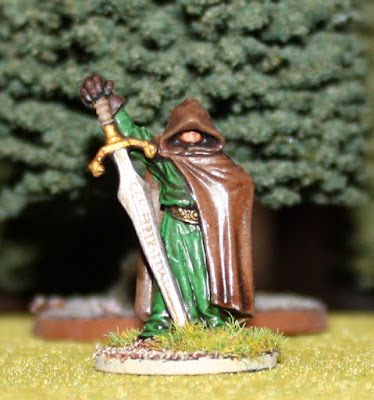 Next up is a Chaos Fighter by Citadel. I like the way half his face has peeled away revealing the skull beneath. I am really pleased with the way the shield has turned out though. It was painted using about ten different layers of slowly lightening metal paints. 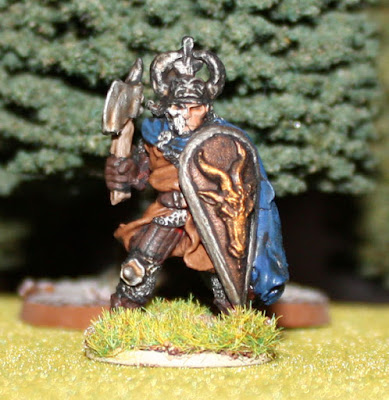 Next up is a Ral Partha female fighter. Many early minis were made with acres of flesh on display. I am not too keen on this if the mini is depicting an adventurer, so I tend to paint leggings and sleeves onto them if I feel it appropriate. I painted leggings onto this lady fighter, which I think sets off the shield and scabbard quite nicely. 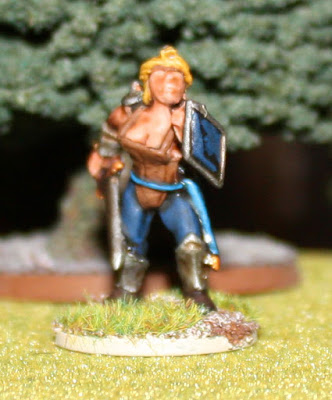 Finally, here is a bandit mini, I think by Citadel. Initially he was armed with a sword, but this had snapped off some years back. I drilled out the sword hand and put a spear into his grip instead. I think it goes rather well with his chunky shield. 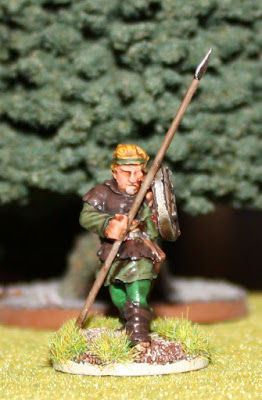 I managed to also do quite a bit more work on some Warlord Celts, some trees and a few figures to make up the General stand for my HotT barbarian army. Hopefully there will be more photos of these next week.
Posted by Little Odo at 21:41