A couple of magic users were finished this weekend. I think both are early Citadel minis, in fact I think the one below is from the Fantasy Adventurer range and is listed as an Illusionist. That said, I will be using him as a wizard of the element of Fire. This picture should get an X rating, so apologies for any embarrassment/offence caused. The figure below is a priestess of some sort and comes from the same range as the self-dubbed Amazons from a few posts back. I also have a couple more of the range that are supposed to be on horse back, but several of the horses have become lost over the years. I do, however, have some alternative mounts, so I may come up with an interesting combination in the future. 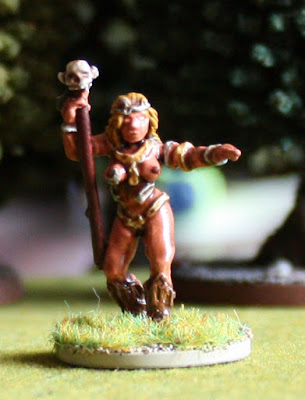 This figure will probably be used as a sorceror - a person who is able to channel earth/life forces, like druids, shamans and so forth, as opposed to the elemental or divine magics that are also around.
So far, all of the magic users I have shown on the site have been wizards of the five Elemental schools of magic - Air, Earth, Fire, Water and the Void (lack of any element - the space between things). These are magics that are learned from dusty, ancient tomes as opposed to sorcery, earth power that is channeled naturally (through a natural gift), or divine magic that is granted by the gods. I am toying with the idea of five types of magic but have only developed the three (wizardry, sorcery and divine) above to any degree so far. The final two types will most likely be a form of necromancy and summoning from the Other Worlds (Cthulhu type critters along with demons, devils and so forth). That said, I may just stick with the original three magics idea above. I got the idea of Five Magics from a book title (Master of Five Magics) I saw many years ago, but never actually got round to buying or reading it, although it did, and still does, sound intriguing. I have also had some good ideas with regards the Afterlife etc recently and have some great details planned out as to how this works.
Hopefully more details on my RPG world will be put up on the site soon in snippet forms like above. The ideas are probably not original and others have most likely had the same thoughts, but they have been developing within my old gaming groups and more recently my imagination for the last 30+ years. I am hoping to kick things off in my fantasy world with some HotT action and a Play by Email strategy game.
Posted by Little Odo at 19:09